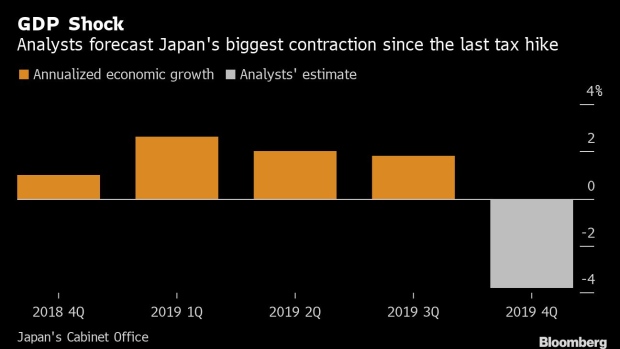 TOKYO, JAPAN - FEBRUARY 13: People wearing face masks ride escalators on February 13, 2020 in Tokyo, Japan. At least 219 passengers and crew onboard the Diamond Princess cruise ship have tested positive for COVID-19 making it the biggest centre of the virus outside China. Japan has also so far diagnosed 28 other people with the illness, some of whom are evacuees from Wuhan, and has announced measures to ban entry to foreign travelers from Zhejiang alongside an existing ban on non-Japanese nationals coming from Hubei. (Photo by Tomohiro Ohsumi/Getty Images) , Photographer: Tomohiro Ohsumi/Getty Images AsiaPac

(Bloomberg) -- Japan’s economy likely suffered its biggest contraction since 2014 at the end of last year leaving it in a vulnerable state, as fallout from China’s viral outbreak threatens to turn a one-quarter-slump into a recession.

A sharp drop in consumer spending after a sales tax hike is seen as the main culprit behind an annualized 3.8% contraction estimated by economists. The slide would be the worst for Japan since the second quarter of 2014, when a previous tax increase prompted the economy to shrink by 7.4%.

Economists previously viewed the expected fourth-quarter contraction as a tax-triggered blip compounded by typhoons that battered manufacturers struggling with weak export demand. But economists are now concerned the coronavirus could delay or even derail a weak recovery forecast for early this year, an outcome that policy makers would find difficult to ignore.

“Japan’s underlying economy isn’t on a firm footing to start with, so growth can be easily pushed into a negative territory if something like the coronavirus happens,” said Hiroshi Miyazaki, an economist at Mitsubishi UFJ Morgan Securities. He takes a far more pessimistic view than the consensus, forecasting a 7.5% decline.

Even before the virus started to threaten the outlook, Japan’s domestic economy was looking shakier than government officials and economists had expected.

Analysts’ forecasts have become progressively gloomier as it became clearer that shopping rebates and other government measures meant to maintain households’ spending after the tax hike hadn’t worked as well as hoped.

Economists estimate that consumer expenditure fell 7.8% in the fourth quarter, alongside declines in business investment and exports.

The full extent of the economy’s weakness may also be masked if higher inventories give the headline growth figure a temporary boost. That’s because higher stockpiles now will be a drag on growth later when they’re sold down.

While most economists still project Japan’s economy to eke out growth this quarter and avoid a recession, they are again revising down their projections amid concern the impact of the virus in China will hit Japan’s exports and also reduce tourists to Japan from the mainland.

Prime Minister Shinzo Abe already took action in December to support the economy with a stimulus package that should lift growth as the year progresses. The prime minister also announced Thursday a limited raft of measures to help combat the impact from the viral outbreak, including loan guarantees for small businesses. He’ll likely want to see more evidence of economic damage before taking more extensive action.

The Bank of Japan is likely to hold off on using any more of its depleted policy ammunition to prop up growth, arguing that the special factors weighing on the economy are transitory.

To contact the reporter on this story: Toru Fujioka in Tokyo at tfujioka1@bloomberg.net

To contact the editors responsible for this story: Paul Jackson at pjackson53@bloomberg.net, Jason Clenfield