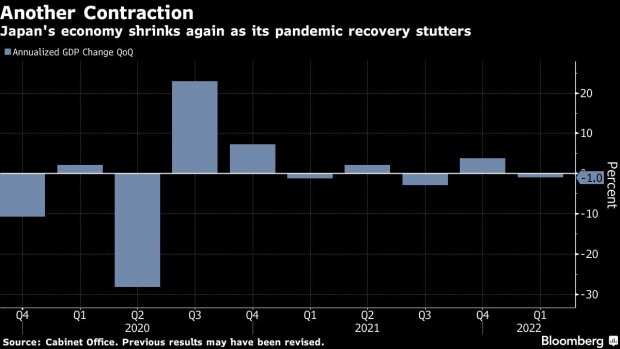 Customers dine inside an Izakaya restaurant in the Shimbashi District of Tokyo, Japan, on Wednesday, March 23, 2022. Japan’s government on Tuesday lifted quasi-state of emergency measures in Tokyo and other regions across the country, bringing to an end steps introduced in early January as cases continue to tumble. , Bloomberg

(Bloomberg) -- Japan’s economy shrank in the first three months of this year as the omicron variant swept across the nation, with lingering supply snarls and soaring import prices adding to the unfavorable conditions for businesses and households.

Gross domestic product contracted at an annualized pace of 1% in the quarter through March, the Cabinet Office reported Wednesday. Economists had expected a decline of 1.8%.

The setback to Japan’s already sluggish recovery from the pandemic stemmed from a deterioration in overall trade and a stalling of consumer spending as quasi-emergency curbs cut business hours and restricted activity during the record virus wave. The fourth quarterly contraction of the pandemic leaves Japan lagging behind its global peers in regaining lost ground.

While more recent figures show an uptick in spending and foot traffic after infections dropped and restrictions were lifted, the release of pent-up demand that would fuel a rebound this quarter is likely to be limited by the impact of elevated energy and import prices.

Those rising costs for companies and consumers have been exacerbated by the war in Ukraine and the slide in the yen to two-decade lows.

China’s slowdown induced by its strict virus lockdowns also clouds the prospects for a robust rebound as it weighs on global trade and renews pressure on supply chains.  What Bloomberg Economics Says...

“Looking ahead, we expect GDP to rebound in 2Q, driven by pent-up demand after the virus curbs were lifted on March 21. Even so, higher commodity prices and the impact of China’s Covid lockdowns on exports pose downside risks to the outlook.”