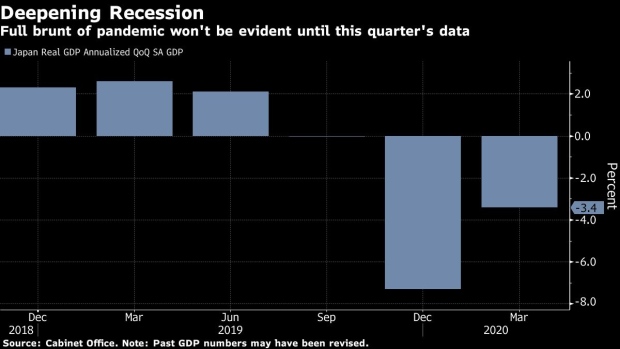 Pedestrians cross an intersection in the Ginza area in Tokyo, Japan, on Saturday, Feb. 15, 2020. Japan's economy likely suffered its biggest contraction since 2014 at the end of last year leaving it in a vulnerable state, as fallout from China's viral outbreak threatens to turn a one-quarter-slump into a recession. Photographer: Akio Kon/Bloomberg , Bloomberg

(Bloomberg) -- Japan’s economy sank last quarter into a recession that’s likely to deepen further as households limit spending to essentials and companies cut back on investment, production and hiring to stay afloat amid the coronavirus pandemic.

Gross domestic product shrank an annualized 3.4% in the three months through March from the previous quarter, the Cabinet Office reported Monday. The economy also contracted sharply in the final three months of last year, hit by a sales tax hike and a destructive typhoon.

“Beyond 1Q, high-frequency indicators suggest the pace of contraction deepened in 2Q, as the state of emergency declared in early April walloped activity. Spending might find some support, as households start to receive the 13 trillion yen in paychecks from the government this month.”