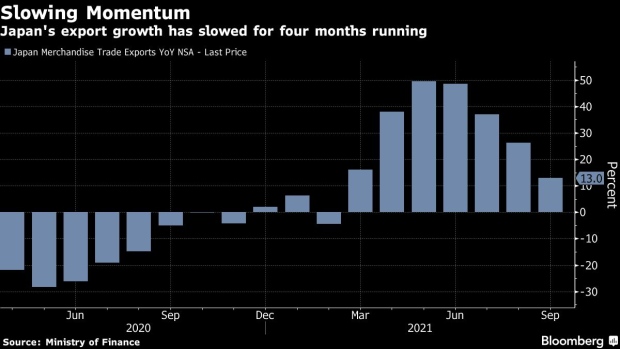 Growth in Japan’s overseas shipments slowed in September to about half August’s pace, advancing 13% from last year’s level, the finance ministry reported Wednesday. Gains from deliveries of steel and chip components were muted by a drop in the nation’s key car exports. Economists had forecast a slowdown to an overall growth pace of 10.5%. On a seasonally adjusted basis, exports fell 3.9% from the prior month, the first month-on-month drop since February.

The figures from the world’s third-largest economy add to evidence that Covid-triggered supply chain bottlenecks are taking a toll on global trade. For Japan, weaker exports put more pressure on consumer spending to start driving the recovery as the country lifts virus restrictions and vaccination rates rise.

The trade slowdown is also likely to factor into new Prime Minister Fumio Kishida’s plans for more economic stimulus. Kishida has said he’ll unveil details of a spending package worth 10s of trillions of yen after national elections at the end of this month.

“Exports are likely to remain weak and it’s hard to say exactly when we’ll will see a clear pickup because uncertainty over supply constraints are so high,” said economist Taro Saito at NLI Research Institute. “A fragile economy is likely to push the government toward a sizable economic package.”

Weaker exports are one reason the Bank of Japan is likely to consider cutting its growth forecast for this fiscal year in a report later this month, according to people familiar with the matter. Supply chain problems for automakers are one factor that needs consideration, they said.

“Looking ahead, we expect exports to drop year on year in October due to softer Chinese demand and disruptions to automobile production.”

Wednesday’s trade report showed auto shipment slid 40% from last year’s level led by a drop to the U.S., where overall shipments fell for the first time in seven months.

Japan’s total exports were still about 7% above the 2019 level.

A 39% gain in imports led to a 635.4 billion yen ($5.5 billion) trade deficit, as rising oil prices increased the cost of shipments to Japan.

Global ports are growing more gridlocked as pandemic era supply shocks intensify ahead of the holiday shopping season. Bottlenecks are gumming up trade, and triggering price surges that have alarmed central banks around the world, although Japan’s inflation remains muted.

Slower growth in China, the world’s second-largest economy and one of Japan’s biggest markets, is also another factor likely to weigh on trade in coming months. At the end of last week, more than 100 container ships were waiting off Hong Kong and Shenzhen.

Still, economists expect Japan to have maintained growth last quarter, albeit a tad slower, with gains in business investment and government outlays helping to offset a fall in consumer spending and slower trade.

This quarter, consumers are seen helping drive a quicker expansion, with Japan’s fourth state of emergency lifted this month, virus cases falling sharply and vaccination rates now close to 70%. Tokyo is considering ending all Covid restrictions on certified restaurants and bars, according to local media.

Toyota Shares Climb on Hints of Recovery Despite Production Cut

At Toyota Motor Corp., a bellwether for the auto sector, there are also signs the worst is over in terms of production stoppages. The carmaker last week set targets for November production above levels in recent years, even as it announced ongoing parts shortages.