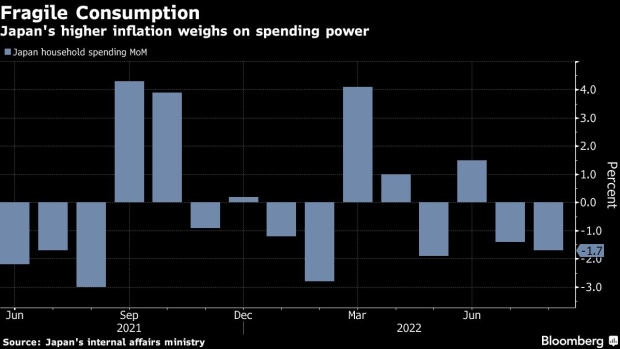 Customers shop at a fruit and vegetable stall inside the Hachioji Wholesale Center in Hachioji, Tokyo Metropolis, Japan, on Tuesday, Aug. 2, 2022. Yen swings between small gains and losses with markets weighing tension over Taiwan and the Federal Reserve’s monetary path. , Bloomberg

(Bloomberg) -- Japan’s households cut back on spending for a second month in August, as the rising cost of living weighed on consumers’ budgets amid a summer wave of Covid infections, suggesting fragility in the country’s recovery path.

Household outlays dropped 1.7% from July, the ministry of internal affairs reported Friday. Falls were led by housing and food. Spending increased 5.1% from a year ago, compared with a 6.7% increase forecast by analysts.

The weak consumption data suggests headwinds for an economic recovery from the pandemic.

The fastest inflation in more than three decades excluding the impact of tax hikes also threatens to hurt future consumption.

“We have to take into account a surge in Covid infection in August, but even with that in mind, household spending was weak,” said Toru Suehiro, chief economists at Daiwa Securities. “As real wages fall, consumer sentiment is worsening and people are getting into a saving mode.”

The government has already extended its price-relief measures, and is set to compile a fresh economic stimulus package to ease the pain on households and businesses by the end of this month. The accelerating pace of inflation could boost the size of the package.

“The government is trying to cap a hike in power bills, but it’s food that’s rising most in the consumer price index,” said Suehiro. “I don’t think people will feel much of a relief.”

“Price increases are becoming an obstacle for consumers, who haven’t experienced inflation above 2% for more than a decade.”

Still, many analysts expect the economy to have kept growing in the third quarter after returning to its pre-pandemic size in the previous three months. Industrial production and retail sales beat estimates in August.

The government refrained from bringing back virus-related restrictions even as the daily infection numbers topped 200,000 in the summer.

On Oct. 11, the nation’s borders are set to reopen to inbound tourism, which may boost spending in the economy with a weak yen increasing visitors’ purchasing power. On the flip side, the currency’s historic slide has made imports of food and energy more expensive and weighed on Japanese households.

The Bank of Japan has stuck to its stance that the current cost-push inflation remains unsustainable. Governor Haruhiko Kuroda argues the bank needs to keep interest rates at rock-bottom levels to support the economy, and spur the sort of inflation that’s accompanied by robust wage growth.

The August wage data showed cash earnings gained 1.7% from a year ago, according to the labor ministry. Real wages, adjusted for inflation, fell 1.7%, continuing to chip away at households budgets.

Prime Minister Fumio Kishida has said his government aims to achieve wage gains that match the current level of inflation, and intends to include new measures to achieve this in the upcoming stimulus package.

So far there’s still some distance to that goal, increasing the likelihood that Kuroda will stick with his low-rates stance until he steps down from the top job in April.