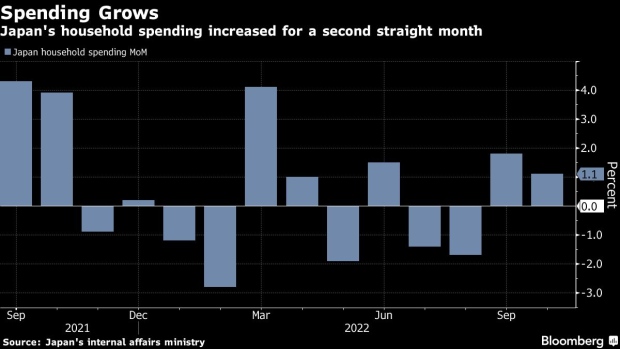 (Bloomberg) -- Japan’s households boosted spending in October for a second straight month despite accelerating inflation and falling real wages, marking a better-than-expected start to the final quarter of the year.

Outlays rose 1.1% from September, led by gains in clothing and entertainment, the ministry of internal affairs reported Tuesday. Spending climbed 1.2% from a year ago, more than the increase forecast by analysts.

The solid spending data suggests the release of pent-up demand is supporting the country’s recovery path for now even as inflation eats into households’ purchasing power. Economists forecast that Japan’s economy will return to growth again this quarter, pushed up by private sector investment and consumption. In the three months ended September the economy unexpectedly shrank as the yen’s historic slide battered firms and households.

“It’s not a bad result -- it shows consumption is recovering and picking up,” said Yoshiki Shinke, an economist at Dai-Ichi Life Research Institute. “It’s true that inflation has been pushing down consumption. But I think the counter reaction to the spending drop during the Covid surge currently outweighs the inflation impact.”

A travel subsidy program for residents that began in October and the reopening of Japan’s borders to international visitors has also boosted activity in the tourism sector, a factor that should help support the country’s regional economies.

Airline operator ANA Holdings revised up its net income view for the fiscal year 2023 by 91%.

Retail sales also continued to climb in October from the prior month, reflecting relatively undeterred demand for shopping.

“Offering a mild offset, nationwide travel subsidies, which were available from Oct. 11, probably supported the tourism industry -- giving a lift to spending. Retail sales climbed 0.2% in September from the prior month.”

A separate report showed real wages dropped for a seventh month, falling by the most since 2015. The 2.6% real decline, and the nominal gain of 1.8% both came in a long way from Bank of Japan’s Governor Haruhiko Kuroda’s wage hopes.

He has maintained that Japan needs paychecks to grow at around 3% to get to the central bank’s 2% sustainable price goal.

Nominal wages haven’t kept up with accelerating inflation. Japan’s price increases hit their fastest clip in 40 years in October, and the pace likely sped up further in November based on last month’s Tokyo data, a leading indicator for nationwide trends.

“The situation hasn’t changed,” said Dai-ichi’s Shinke. “Wages are rising, but they are not keeping pace with inflation. I don’t know what will happen next year, so the spring wage negotiations are key.”

(Updates with more details from the report, economist comments)