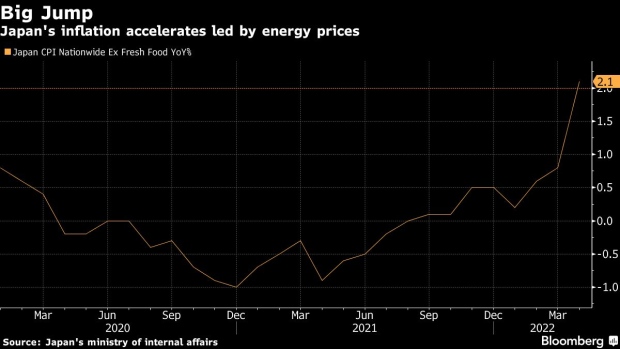 A customer looks at clothes on display at the Shimotori shopping arcade in Kumamoto, Japan, on Wednesday, May 18, 2022. Japan is scheduled to release its consumer price index (CPI) figures for March on May 20. , Bloomberg

(Bloomberg) -- Japan’s inflation accelerated sharply in April to top the Bank of Japan’s target level, an outcome that will complicate Governor Haruhiko Kuroda’s messaging that stimulus must continue.

Consumer prices excluding fresh food increased 2.1% from a year earlier, according to the ministry of internal affairs Friday. That’s the quickest pace since 2008 after excluding tax hike effects. Economists had expected the key inflation measure to climb to 2% in April compared with 0.8% the prior month.

The sharp acceleration is largely a result of the fading out of cheaper phone fees from a year ago that had been masking the impact of surging energy prices.

Economists say the result is unlikely to prompt the BOJ to consider adjusting policy as it is targeting stable 2% price growth. The central bank insists that the current bout of cost-push inflation isn’t sustainable.

“The rise in Japan’s core inflation above the Bank of Japan’s 2% target in April is a watershed development. But it was due to statistical distortions and cost-push factors. That won’t convince the central bank that it can let up on its reflation effort.”

Still, with actual figures now above the bank’s targeted level, market speculation over a move to normalize policy is likely to continue. Public discontent at the growing cost of living could also build up if inflation remains elevated, bringing into question why the government is backing the BOJ’s stance.

Both factors present a communications challenge for the central bank as it seeks to justify why it is continuing with rock-bottom interest rates when its global peers are raising borrowing costs to tackle inflation.

“Right now the rising costs of food and energy are working against the economy and inflation has yet to overshoot 2% in the stable manner the BOJ is aiming for,” said economist Yuichi Kodama at Meiji Yasuda Research Institute. “That’s why this data won’t prompt the BOJ to tighten policy.”

The figures showed that energy was the main upward factor in Japan’s consumer price index, accounting for 1.4 percentage points. Processed foods rose 2.6% in a sign that more companies are passing on higher costs to consumers, adding to pressure on the cost of living.

Prime Minister Fumio Kishida approved an additional budget to help households and firms hit by higher prices earlier this week to keep his public approval ratings in good shape ahead of a key summer election and keep the economy on track to rebound this quarter.

By providing aid, the government is giving the BOJ more scope to continue with its easing measures, even after the yen set fresh two-decade lows earlier this month, a factor that is amplifying higher import prices.

“Consumer spending may be weakened by this inflation, but I don’t expect it to collapse as there’s pent up demand following the pandemic and households have forced savings on hand,” said Yoshimasa Maruyama, chief market economist at SMBC Nikko Securities.

Without Kishida’s measure to cap gasoline prices, the industry ministry estimates the going rate at the pump would have been above 200 yen per liter instead of 170.4 yen this week.

Japanese businesses are facing the strongest cost pressure since 1980 thanks to soaring commodity prices inflated by the weak yen and supply chain bottlenecks.

The list of corporate announcements on price hikes continues to grow, a factor that may strengthen inflation expectations. A recent government survey showed 94% of consumers now see prices rising over the next year.

Food & Life Cos., operator of the Sushiro conveyor-belt sushi chain, said this month it will push up its 100 yen (78 cents) a dish price at some stores by around 9%, breaking away from a 38-year tradition of sticking to that mark.

Moves like this have nudged an increasing number of economists, including Maruyama, to expect inflation to remain around 2% in 2022 before it starts slipping back to more tepid growth next year as the energy factor in the CPI eases on a year-on-year basis.

Kuroda already acknowledged the possibility of inflation hitting about 2% this spring, but has repeatedly said much higher wage growth and more widespread gains in price items like the US and Europe are needed before normalization of policy can be considered.

“For now, I see no reason to change our view that Japan’s inflation situation is very different from what’s happening in the US and Europe even considering today’s results,” Maruyama said. “We continue to see the BOJ sticking with monetary stimulus at least until Kuroda steps down next year.”