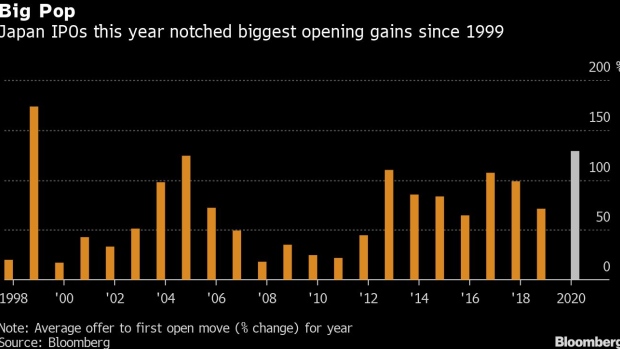 The average initial pop for IPOs in the Japanese market this year was nearly 130%, the most since 1999. The best performer was artificial-intelligence systems firm Headwaters Co., which jumped 1,090% in its first trade. Image-recognition software maker Ficha Inc. came second with an 806% gain, followed by internet-of-things developer Tasuki Corp., which rose 655%.

Backed by easy-money policies and growth in individual investing, new listing markets have been frothy this year despite the coronavirus market turmoil, as seen in the dramatic gains of Airbnb Inc. and DoorDash Inc. in U.S. debuts earlier this month. Stay-at-home tech plays and cloud computing upstarts especially found 2020 to be the perfect time to tap the public markets.

“The reason for the large opening gains is that there were many IPOs of stocks that were relevant to the times,” such as Japan’s digitalization push, said Hideyuki Suzuki, a general manager at SBI Securities Co. With low interest rates expected to continue for some time, the IPO market should continue to attract funds, he said.

Japanese stocks overall lagged in the pandemic recovery, with the Topix not erasing its year-to-date loss until November, months after U.S. and Asian peers. The Tokyo Stock Exchange’s Mothers Index of startups was a notable exception, with a gain of around 30% on the year, thanks to its heavy weightings of biotech and Internet names, as well as the surge in retail investing.

A final listing set for today pushes the number of companies going public in Japan in 2020 to 94, up by four from the previous year, even with a pandemic-driven drought from early April to late June. About 70% were listed on Mothers. The overall value was small, with companies raising a total of $3.3 billion, and no single deal worth more than half a billion dollars. That compares with $181 billion raised in the U.S. and $51 billion in Hong Kong.

Kioxia Holdings Corp. in September decided to postpone what would have been Japan’s largest offering of the year, at up to $2.9 billion, due to market uncertainty amid U.S.-China trade friction. Investors will be watching whether the Toshiba Corp.-affiliated chipmaker decides to try its luck again in 2021.

In the absence of blockbuster deals with international appeal, local retail traders helped pick up the slack. Individuals accounted for 20% of total trading value on the Tokyo Stock Exchange this year, up from about 16% in 2019.