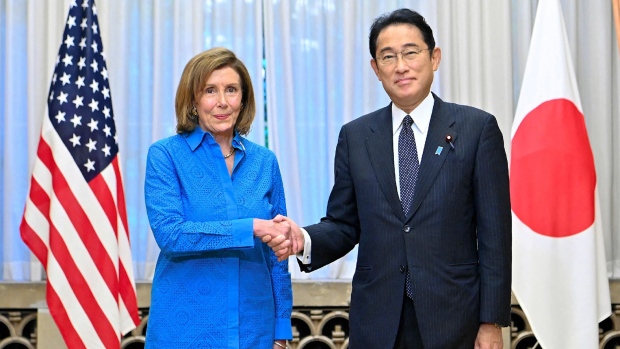 (Bloomberg) -- Japan’s accusation that China fired ballistic missiles into its exclusive economic zone close to Taiwan has heightened tensions between the neighbors, which often spar over human rights and historical grievances.

The show of force was part of Beijing’s biggest cross-strait exercises in decades, and brought a renewed focus to concerns that any military action against Taiwan would have serious ramifications for Japan. That could fuel arguments in Tokyo for a swift increase in defense spending and looser constitutional restrictions on the military.

Beijing’s response to Nancy Pelosi’s visit to Taiwan deals a blow to the delicate balance Japan has sought to maintain between bolstering its security ties with its US ally and other Western countries, and attempting to avoid completely alienating China -- its biggest trading partner. It comes as Tokyo is working on a revision of the government’s national security strategy and hammering out plans for a promised “substantial” increase in defense spending.

“If China continues with its military drill schedule as announced and if there are more incidents like this, it will definitely backfire on Beijing,” said Yuki Tatsumi, senior fellow at the Stimson Center in Washington. The incident will increase awareness of the potential effects of a contingency in Taiwan, she said, adding it provides more ammunition for policymakers seeking rapid increases in military spending and an overhaul of the pacifist constitution.

Prime Minister Fumio Kishida told Pelosi in Tokyo on Friday he strongly condemned the launches, and that his government had urged Beijing to call off its military exercises immediately. Japan’s Ministry of Defense said Thursday that five of a barrage of Chinese missiles were estimated to have landed in Japan’s EEZ -- which would be a first -- splashing down to the southwest of Ishigaki in the Okinawa island chain.

Kishida told reporters he had described the missile launches as “a serious problem for our country’s security and the safety of our people,” in his conversation with Pelosi. He also urged “an immediate halt to the military exercises.”

Ahead of the campaign last year to take over as prime minister, Kishida warned that Taiwan is at the frontline of the standoff between China and the US and a contingency in the Taiwan Strait would have enormous consequences for Japan.

China’s drills have sparked a series of tit-for-tat complaints in recent days. Japan signed up to a Group of Seven statement expressing concern over the exercises, prompting China to call off a planned meeting between the two countries’ foreign ministers in Cambodia on Thursday.

Called in to China’s Ministry of Foreign Affairs for representations about the G-7 statement, Japan’s ambassador, Hideo Tarumi, expressed “grave concern” about the drills and said the missile launches could lead to a major change in ties between the two countries. China’s Foreign Ministry spokeswoman Hua Chunying dismissed Japan’s complaints, saying no Japanese EEZ could be said to exist in the area because borders had yet to be delineated.

The Ministry of Defense in Tokyo said that four of the ballistic missiles thought to have landed in Japan’s EEZ probably flew over Taiwan. If confirmed, it would mark a major escalation as it would be the first time China has flown missiles over Taiwan itself.

Taiwan won’t release information on the flight paths given China’s aim to intimidate, as well as to protect its intelligence, surveillance and reconnaissance operations, its defense ministry said.

Often fraught relations between Japan and China began to turn sour again two years ago, as Tokyo joined G-7 condemnation of Beijing’s clampdown on Hong Kong. Ships from the two sides have chased one another almost constantly for about a decade around uninhabited East China Sea islands they both claim.

How a Few Tiny Islands Put Japan and China in Dispute: QuickTake

Since Moscow’s invasion of Ukraine, Japan has also become increasingly concerned about military cooperation between China and Russia, who have conducted joint drills near its territory. For its part, China has criticized Japan’s participation in the so-called Quad grouping that includes Australia, India and the US, and is seen as an attempt to rein in Beijing’s growing sway in the Indo-Pacific region.

“The tensions will stay bad for some time,” said Kyoko Hatakeyama, professor of international studies at the University of Niigata Prefecture and author of a book on Japan’s defense policy. But she added Japan remained anxious not to escalate the situation and would probably look for ways to compromise.

“There’s nothing good about getting in a fight with China. Peace will be gone and the economy damaged. Zero positives,” Hatakeyama said.

(Updates throughout with comments.)