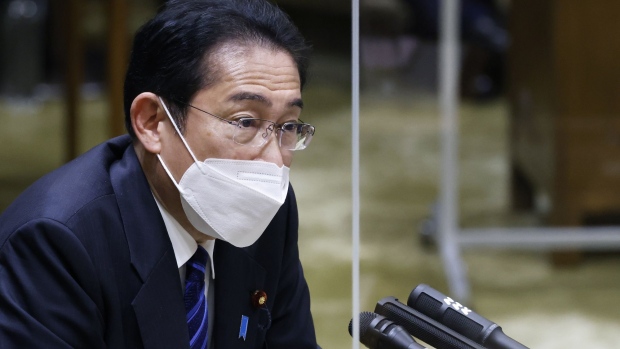 Fumio Kishida, Japan's prime minister, speaks during a budget committee session at the upper house of parliament in Tokyo, Japan, on Thursday, Dec. 1, 2022. The second supplementary budget for the year is set to fund measures to ease the impact of inflation on people and companies. , Bloomberg

(Bloomberg) -- Japanese Prime Minister Fumio Kishida has ordered a sharp defense spending hike that could see his long-pacifist country’s defense budget balloon to near the levels spent by Russia.

Kishida instructed ministers to put together a budget of about 43 trillion yen ($315 billion) for the five-year period starting in April, Defense Minister Yasukazu Hamada said Monday. That’s up 57% on the 27 trillion yen initially budgeted for the current five-year period.

The change of direction for Japan, which has retained a US-drafted pacifist constitution since its defeat in World War II, comes after the country was shocked by Russia’s invasion of Ukraine. China’s threats toward Taiwan and North Korea’s atomic ambitions have also lent support for Tokyo to embark on one of its largest military buildups in decades.

A poll conducted by the Yomiuri newspaper over the weekend found 51% of respondents approved of a hike to more than 40 trillion yen, while 42% disapproved.

The money is set to be used for items such as stockpiling missiles that are capable of striking military assets in neighbors Russia, China and North Korea. Another goal over the next 10 years would be to triple the number of military units equipped with ballistic missile interceptors in a southwestern island chain that stretches toward Taiwan, Kyodo News reported Monday, citing a draft of a government document.

The news met with criticism from China. “Japan has been sensationalizing regional tensions in an attempt to seek a military breakthrough,” Foreign Ministry spokeswoman Mao Ning said at a regular news briefing in Beijing on Tuesday.

“This is highly dangerous. It cannot but put Asian neighbors and the international community on high alert about Japan’s commitment to an exclusively defensive policy and to peaceful development,” she said.

Kishida’s increase could mean Japan leapfrogs countries like Saudi Arabia and France to become the world’s fifth-largest defense spender and reaches annual spending about level with Russia, based on 2021 figures provided by the Stockholm International Peace Research Institute. The slump in the yen against the dollar in recent months will mean the cash may not go as far as in the past.

Ministries and ruling Liberal Democratic Party politicians have wrangled over the extent of the increase, which will place another strain on the finances of the deeply indebted and aging nation.

The premier called for a concrete plan by the end of the year to fund the increase, including spending reforms and use of non-tax revenues as well as taxes, Hamada said. Finance Minister Shunichi Suzuki told reporters Tuesday that adjustments would be needed to secure the necessary funds for the five-year period.

The government is set to reveal how it plans to use the funds in revised national security documents and an annual budget to be unveiled later this month.

Kishida has also ordered ministers to aim to raise total defense-related spending to 2% of gross domestic product over the same five-year period. While Japan isn’t a member of the North Atlantic Treaty Organization, that would meet the target set for members.

The figure is likely to be made up of defense ministry spending and other items such as research and coastguard funding, which have previously been counted separately.

(Updates with comment from China in sixth and seventh paragraphs.)