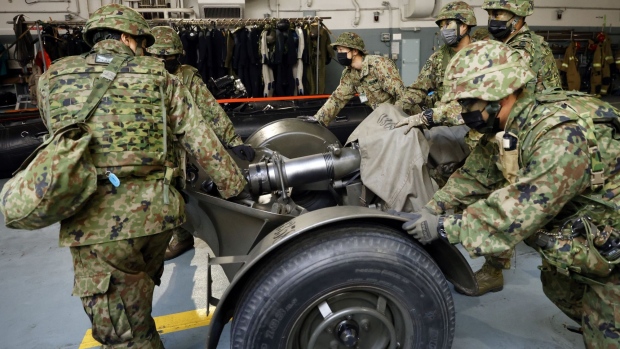 Members of the Japan Ground Self-Defense Force (JGSDF) move equipment from the Japan Maritime Self-Defense Force (JMSDF) JS Kunisaki tank landing ship to a JMSDFs Landing Craft Air Cushion (LCAC) during a joint exercise by the Japan Self-Defense Forces (JSDF) off the coast of Tanegashima island in Kagoshima, Japan, on Thursday, Nov. 25, 2021. Japan has openly expressed concerns about tensions across the Taiwan Strait and their effect on regional security. Photographer: Kiyoshi Ota/Bloomberg , Bloomberg

(Bloomberg) -- Japanese Prime Minister Fumio Kishida instructed his defense and finance ministers to increase national-security related expenditures to 2% of gross domestic product by fiscal 2027, putting a figure on the planned expansion for the first time.

Kishida summoned the two ministers Monday evening, as the aging and deeply indebted country wrangles over how to fund proposals like stockpiling cruise missiles to better protect itself against growing regional threats. The premier had previously avoided specifying a target figure for spending.

“We are to put together a budget for defense and related activities that will reach 2% of current GDP in fiscal 2027,” Defense Minister Yasukazu Hamada told reporters at the prime minister’s office after meeting Kishida.

Finance Minister Shunichi Suzuki told reporters Tuesday the government was preparing the budget in line with Kishida’s instructions and the details were still under discussion.

Amid public unease following Russia’s invasion of Ukraine and rising tensions around Taiwan, Kishida has repeatedly pledged to bolster the country’s defenses, and to back this up with any necessary increase in spending. Although Japan is not in NATO, the figure would put it in line with the target specified by North Atlantic Treaty Organization members.

Japan relies heavily on the US “nuclear umbrella” for its defenses and has long limited its defense spending to 1% of GDP, which amounts to more than 5 trillion yen ($36 billion). The new budget is expected to include items such as scientific research that weren’t previously counted as part of the spending, meaning the move may not involve a doubling of outlays, Kyodo News and other local media have reported.

Nevertheless, the plans mark a turning point for Japan, which has retained its US-drafted pacifist constitution since 1947. The move comes as the government revises its National Security Strategy and seeks to finalize the defense budget for the year starting in April 2023 by the end of the year.

--With assistance from Emi Urabe.