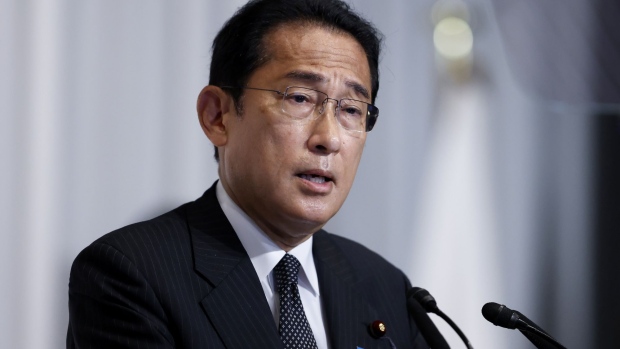 Fumio Kishida, Japan's prime minister and president of the Liberal Democratic Party (LDP), speaks during a news conference at the party's headquarters in Tokyo, Japan, on Monday, July 11, 2022. Kishida's strong election victory presents him with a three-year time frame to pursue his own agenda of making capitalism fairer and greener, with no need to quickly change course on economic policy including central bank stimulus. , Bloomberg

(Bloomberg) -- Japanese Prime Minister Fumio Kishida said he ordered as many as nine nuclear reactors to be restarted to help ease concerns about a possible power crunch.

“There are concerns about a power shortage this winter,” Kishida told a news conference Thursday. “We must prevent this situation.”

Japan is struggling with tight electricity supplies due to extreme weather, the retirement of older power plants, and delays to restarting nuclear reactors that were shut following the Fukushima nuclear disaster in 2011. It is also cutting its use of energy sources from Russia following its invasion of Ukraine.