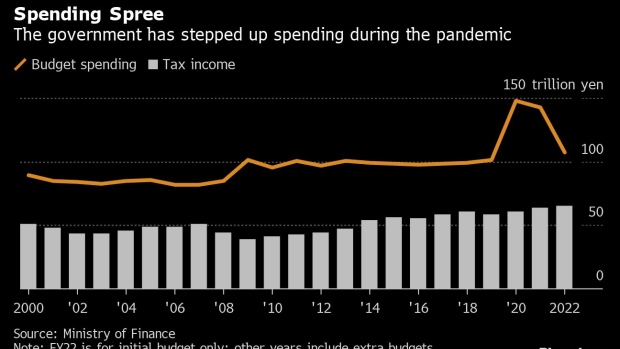 Residential and commercial buildings at dusk in Tokyo, Japan, on Friday, July 1, 2022. The government issued a heat stroke alert for several regions in the country including the nations capital, urging people to take health precautions amid scorching temperatures. Photographer: Kiyoshi Ota/Bloomberg , Bloomberg

(Bloomberg) -- Japanese Prime Minister Fumio Kishida instructed the government Friday to come up with an economic stimulus package by the end of October to help mitigate the impact of inflation, as economists warned against over-sized spending.

Matsuno didn’t clarify the size of the measures, leaving unclear how much the government will spend at a time when the economy is showing signs of a resilient recovery. An additional budget to fund the spending will swiftly follow, he added.

“There seems to be talk of spending 30 trillion yen ($207 billion) but I think in reality what’s really needed is just 5 or 6 trillion,” said Shinichiro Kobayashi, chief economist at Mitsubishi UFJ Research & Consulting. “Japan’s economy isn’t teetering on the brink of crisis so what we need now are economic measures to help those who are suffering.”

The order comes with financial markets still in shock after the UK government’s mini-budget last week set out a wide range of tax cuts requiring heavy borrowing in an economy suffering from the strongest inflation in decades.

While Japan isn’t expected to shock markets with a massive round of spending, the extra outlays will add to the biggest debt load among developed economies and add to the sense that the country is overly reliant on extra budgets financed at rock-bottom interest rates.

“Talk of making the stimulus package big as if it’s some competition would be an act of extreme irresponsibility,” said economist Atsushi Takeda at Itochu Research Institute. “It would show they are just looking at the chaos in the UK as some kind of fire on the other side of the river, or that they are not watching it at all.”

Explaining the need for the latest stimulus, Kishida said Thursday that energy and food price rises are hitting households, and fears of a global recession remain a risk for Japan’s economy.

He said it’s possible electricity prices will increase up to 30% in the spring. He said he was looking to create a new system to mitigate extreme swings in power prices, without elaborating further.

Matsuno said that specific measures will include additional support for families and firms hit by rising prices, and plans to reduce reliance on fossil fuels and chemical fertilizer. Additional incentives will also be considered to help wage increases, he said. Kishida is expected to give a policy speech in parliament on Monday, where he may give more details on his stimulus plans.

The emphasis on inflation in the package shows that the pain of rising costs is now seen as a bigger economic menace than the pandemic. Kishida’s popularity has also plunged in recent weeks, making it critical for the premier and his ruling party to shore up support with economic stimulus.

As Japan fully reopens its border on Oct. 11, Kishida is reportedly targeting an annual 5 trillion yen in spending by foreign visitors, with the feeble yen expected to boost their purchasing power.

Japan’s currency has been weakening against the dollar as the BOJ continues to keep interest rates low while the Federal Reserve tightens policy. The yen’s historic slide has cut into domestic consumers’ spending power by making imports of energy and food more expensive.

The yen has lost around 20% against the dollar this year despite Japan’s first intervention in 24 years to support it last week.