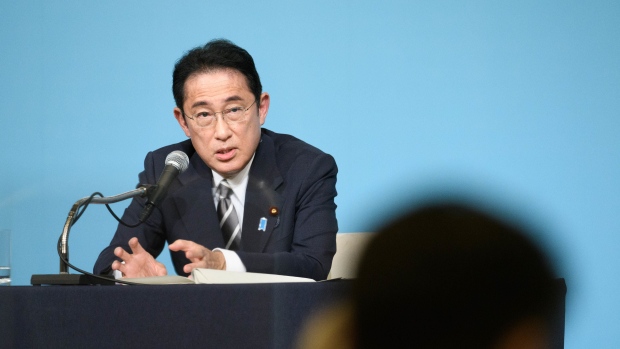 Fumio Kishida, Japan's prime minister, arrives on the opening day of the Group of Seven (G-7) leaders summit at the Schloss Elmau luxury hotel in Elmau, Germany, on Sunday, June 26, 2022. Issues on Sunday's formal agenda include the global economy, infrastructure and investment and foreign and security policy, while a number of bilateral meetings are also planned. , Bloomberg

(Bloomberg) -- Prime Minister Fumio Kishida called for a significant upgrade of his country’s ties with NATO, as he became the first Japanese premier to attend a summit of the alliance.

His comments at the gathering in Madrid marked the latest step toward a more robust security posture for Japan, which has maintained its US-drafted pacifist constitution unchanged since 1947.

Kishida said his presence at the meeting, alongside his counterparts from Australia, New Zealand and South Korea, showed that security in Europe couldn’t be separated from that of the Indo-Pacific, a Japanese foreign ministry official told reporters.

Reiterating concerns about attempts to change the status quo by force in the South and East China Seas, the premier said he was looking forward to an early visit to Japan by NATO Secretary General Jens Stoltenberg.

Kishida also called for an overhaul of a 2014 document that lays out nine areas of cooperation between Japan and NATO, such as cyber defense and maritime security.

He also attended a trilateral summit with Yoon and US President Joe Biden.