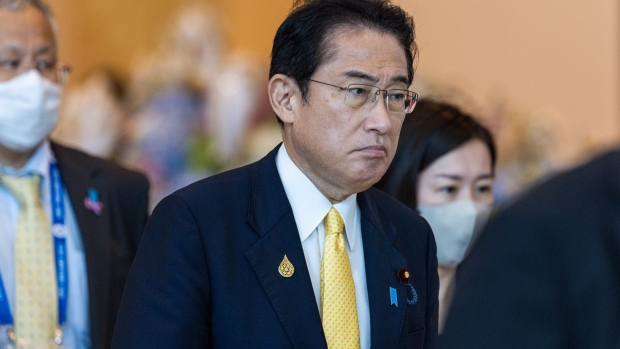 (Bloomberg) -- Japanese Prime Minister Fumio Kishida, whose public support has nosedived over a series of scandals, is now seeing his clean personal image tarnished by questions over his own political campaign financing.

The premier sought to brush off a magazine report that questioned election expenses from last year, telling reporters Thursday while some receipts his office submitted didn’t include complete information, the money had been spent appropriately.

Kishida also denied domestic media reports that he was thinking of reshuffling his cabinet in the coming weeks. His support has tumbled to its lowest since he took office in October 2021, and he has been trying to repair damage after a series of scandals forced him to replace three ministers in the space of a month.

Though he need not face another election for more than two years, sagging approval ratings make it more difficult for Kishida to control his party and push policy pledges, including an increase in defense spending through parliament. The military outlay may require a tax hike, something that could cause him more political pain.

Kishida is facing a crucial juncture in his nearly 14-month tenure. Eight of the 10 prime ministers in the two decades before him served less than a year and a half, and voters are used to a change at the top when polls indicate they’ve soured on a leader.

“I’m aware of the media reports,” Kishida said, when asked about plans to reshuffle the cabinet. “But I’m not thinking of that at all. I must focus on parliament now,” he added.

An online report from the Bunshun magazine emerged this week about incomplete receipts relating to his campaign for the October 2021 general election. The money was spent appropriately, in accordance with a report to which the receipts were attached, Kishida said.

The premier said he would instruct his office to make sure such problems didn’t occur in future. He added he didn’t know the total amount involved, but believed the items purchased included things like convenience store food and stationery.

“His leadership is perceived as weak,” said Mieko Nakabayashi, a former lawmaker and professor of political science at Waseda University. She added that Kishida’s failure to clamp down on party links to the Unification Church had disappointed voters. “Rivals within the party are seeing some opportunities.”

Kishida, who came to office buoyed by a clean image, was battered by a scandal over his Liberal Democratic Party’s longstanding links to the Unification Church, which has a list of court rulings against it over its fundraising methods. The religious group, often derided as the “Moonies,” came under renewed scrutiny after former premier Shinzo Abe was fatally shot in July by a man citing a grudge over the former leader’s ties to the church, which he blamed for bankrupting his family by taking excessive donations from his mother.

In recent weeks, Kishida has seen his cabinet beset by scandals. Former Economy Minister Daishiro Yamagiwa resigned over his links to the Unification Church. Justice Minister Yasuhiro Hanashi stepped down after quipping that he only got noticed when he signed off on executions. Last weekend, Internal Affairs Minister Minoru Terada was forced to step aside over accusations of political funding irregularities.

Japan’s Economic Recovery Slammed Back Into Reverse by Weak Yen

A poll published by broadcast news network ANN on Monday found support for Kishida’s cabinet had fallen 2.6 percentage points to a new low of 30.5%. Polling by public broadcaster NHK shows older voters -- a key constituency in graying Japan that previously supported Kishida -- are turning away from him.

The setbacks come as he seeks to push through a number of potentially divisive policies, including a substantial rise in defense spending he has repeatedly pledged to Japan’s ally, the US. An expert panel said this week the changes would necessitate a tax increase, while polls indicate most voters don’t favor more taxation.

A separate plan to use national ID cards connected to the taxation system to double as health insurance cards has also met with public suspicion. Even a potentially popular bill aimed at helping the victims of the Unification Church’s practices was dismissed by lawyers as virtually useless, public broadcaster NHK said this week.

On top of this, Kishida is struggling to deal with the country’s highest inflation in decades and a slowing economy.

“It comes down to his decision-making and trust that people place in him. That’s what the entire series of scandals are pointing to,” Nakabayashi said. “He’s not really explaining what’s going on and people are feeling left behind.”

--With assistance from Takashi Hirokawa.

(Updates and recasts with details throughout.)