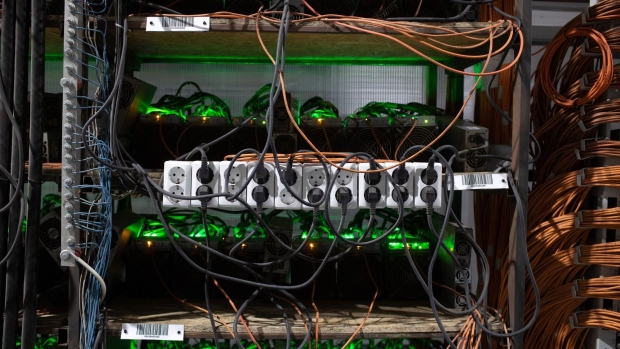 (Bloomberg) -- SBI Holdings Inc., Japan’s biggest online brokerage, said it will shut crypto-mining operations in Russia, adding to the churn in the region sparked by the threat of US sanctions.

Russia’s invasion of Ukraine has created uncertainty over the prospects of the mining business in Siberia, while crypto’s global market rout has rendered it less profitable to mine tokens, a spokesman said in response to questions from Bloomberg News. Chief Financial Officer Hideyuki Katsuchi announced the plan to sell machinery and withdraw earlier this week.

Miners have flocked to Russia, in part to take advantage of low-cost power from natural gas and hydropower dams, that have made it a popular destination besides North America after Beijing’s crypto mining ban last May forced them out of China.

But in April, the U.S. Treasury Department imposed sanctions on Switzerland-based crypto mining company BitRiver, targeting one of the industry’s largest data-center service providers over its operations in Russia. Shortly after, America’s Compass Mining Inc. sought to liquidate $30 million in hardware in Siberia to avoid sanctions.

SBI Holdings, which has been quicker than most Japanese financial firms in expanding into digital currencies, suspended mining in Siberia soon after the war began, according to the spokesman. That contributed to the company’s crypto asset business reporting a pretax loss of 9.7 billion yen ($72 million) in the three months ended June 30. The group, backed by Sumitomo Mitsui Financial Group Inc., swung to a 2.4 billion yen net loss for the period, its first quarterly loss in a decade, he said.

SBI has yet to decide by when it will complete the withdrawal from Siberia, the spokesman said. The company has no other crypto business in Russia, and it intends to keep operating SBI Bank LLC, its Moscow-based commercial banking unit, he said.

The International Monetary Fund warned in an April report that crypto mining may offer Russia a way around sweeping economic sanctions imposed by the US and other western countries. Sanctioned countries can leverage its energy resources to power mining, while generating revenue directly from transaction fees, it said.