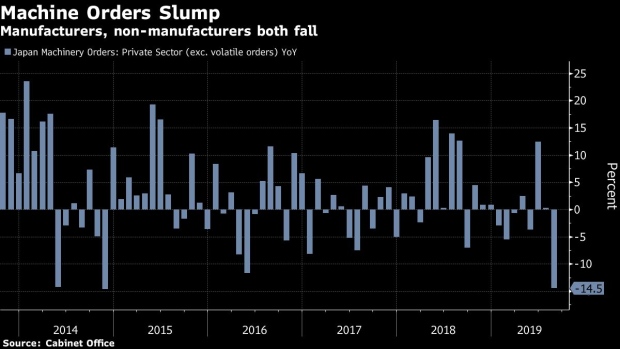 (Bloomberg) -- Japan’s August machinery orders slid the most in almost five years, adding to concern the world’s third-biggest economy may be heading for a recession.

Core machinery orders, a leading indicator of capital expenditure, fell 14.5% in August from a year ago, its biggest drop since November 2014, according to Cabinet Office data released Thursday. Economists had estimated an 8.4% drop. Orders slipped 2.4% from July.

“The fall among non-manufacturers is a big deal,” said Takeshi Minami, chief economist at Norinchukin Research Institute. “Wages and incomes, including winter bonuses, are struggling to rise, which is weighing on non-manufacturers bit by bit."

To contact the reporter on this story: Yoshiaki Nohara in Tokyo at ynohara1@bloomberg.net

To contact the editors responsible for this story: Malcolm Scott at mscott23@bloomberg.net, Paul Jackson, Jason Clenfield