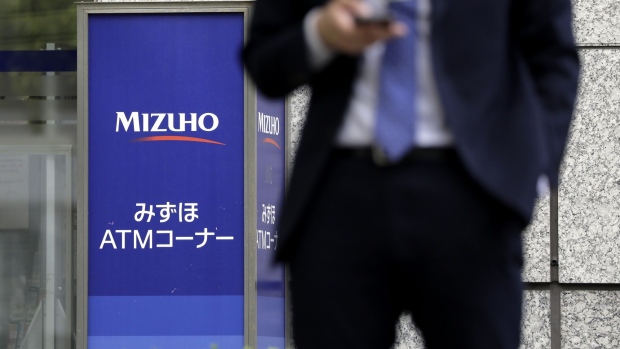 Signage for automated teller machines (ATM) at a Mizuho Bank Ltd., a unit of Mizuho Financial Group Inc. (MHFG), is displayed outside a branch in Tokyo, Japan, on Friday, May 10, 2019. Mizuho will announce its year-end earnings figures on on May 15. Photographer: Kiyoshi Ota/Bloomberg , Bloomberg

(Bloomberg) -- Japan’s banking regulator is planning to issue a business improvement order on Mizuho Financial Group Inc., criticizing the country’s third-largest lender for its shortcomings in governance and corporate culture behind a series of system glitches this year.

The order -- the second one for the bank this year -- will be issued later Friday, according to people familiar with the matter.

It marks the culmination of a months long inspection by the Financial Services Agency into Mizuho to identify the root causes of the technical failures. The regulator originally planned to finish the inspection a lot earlier but had to extend it after the bank suffered fresh incidents in August and September.

Mizuho has been plagued by major IT problems since it was created from the merger of three lenders more than two decades ago. The smallest of Japan’s three megabanks has also been struggling to catch up with bigger rivals which are expanding beyond traditional lending into investment banking and wealth management.

The series of incidents started in February, when ATMs swallowed more than 5,000 cash cards and passbooks. A month later, a hardware failure caused a delay in 300 foreign-currency money transfers. There have been eight such incidents so far this year.

Mizuho had repeated its pledge not to repeat system failures after incidents in 2002 and 2011. Each time, the bank received business improvement orders from the regulator.

Sakai, who became CEO in 2018, has been trying to reshape the bank and change its corporate culture. He made major modifications to its organizational structure to focus resources on growth areas and rein in costs. Despite the system troubles, Mizuho reported sharp profit growth for the first half ended in September and announced the first dividend hike in seven years.