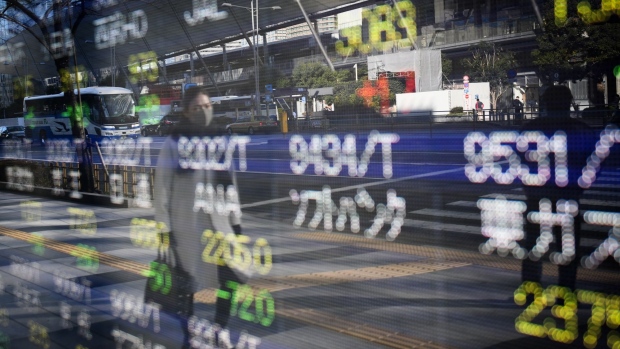 A pedestrian is reflected in an electronic stock board outside a securities firm in Tokyo. Photographer: Noriko Hayashi/Bloomberg , Bloomberg

(Bloomberg) -- A Japanese bank that was once one of the biggest buyers of collateralized loan obligations in the world before cutting back its exposure in 2019 is dipping back into the market, according to people with knowledge of the matter.

Norinchukin Bank participated in a more than $500 million CLO deal for Octagon Investment Partners, refinancing an existing transaction at cheaper rates in what’s known as a reset, according to the people, who asked not to be identified because the information is private. The bank, often called Nochu, didn’t boost its exposure to CLOs with the deal, but could slow the pace at which its holdings are shrinking.

The early signs of Nochu’s return represent another boost for demand in the global CLO market, where issuance has reached fresh records this year as investors clamor to buy securities offering high ratings and protection against inflation. Strong demand for CLOs, which are bonds backed by portfolios of leveraged loans, has helped spur more private equity buyouts in 2021 and raised concerns that the deals could get riskier.

Many of the biggest CLO buyers sat out the market for much of 2020 amid investor fears about the pandemic triggering losses in loans and then the bonds. But slowly, many of these firms, including Wells Fargo & Co, have been coming back.

Nochu, a bank that finances farmers and fishers, had seen its CLO holdings plunge since 2019 after regulators in Japan raised questions about banks’ big CLO holdings. The lender cited falling interest rates in the U.S. and narrower risk premiums on the securities as its allocations fell.

The transaction that Nochu recently participated in was one of the latest examples of a reset, which are also hitting the market at a record pace, rather than a purchase of new securities. Resets allow managers to get sweeter terms on refinancing outstanding securities once they can buy back the bonds using embedded call options, and to extend the life of the transactions.