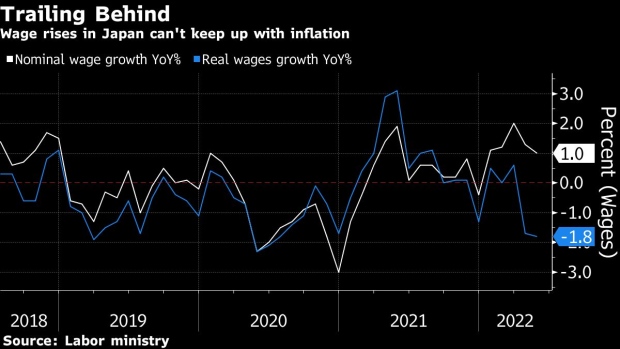 Morning commuters wearing protective face masks cross a street in the Shinjuku district of Tokyo, Japan in Tokyo, Japan, on Thursday, July 29, 2021. While the number of infections directly connected with the Olympics has so far been relatively low, Tokyo and its surrounding areas are experiencing their worst-yet virus wave. Photographer: Noriko Hayashi/Bloomberg , Bloomberg

(Bloomberg) -- Japanese workers’ wages continued to increase at a slower pace than inflation, suggesting households hit by price gains will be more reluctant to spend going ahead.

Cash earnings added 1% from a year ago in May, the labor ministry reported Tuesday. Economists had predicted a 1.5% increase. Real wages adjusted for inflation fell 1.8%, declining the most since the early months of the pandemic.

The back-to-back drop in real wages shows households are seeing their spending power weaken as the cost of living rises faster than their paychecks. While that trend is much starker in other advanced economies, it’s starting to have political implications in the world’s third-largest economy.

“Inflation is negative for consumption,” said Hiroaki Muto, economist at Sumitomo Life Insurance Co. “Pent-up demand won’t last forever, and the growth outlook for the second half of this year looks uncertain.”

The inflationary pain has become a key topic ahead of a national election on Sunday. The ruling coalition led by Prime Minister Fumio Kishida is expected to win a majority, but with his support rates sagging over the impact of rising prices, Kishida may still need to come up with additional relief measures to shore up support among the public.

“Even after the election, Kishida will want to keep public support high,” said Muto. “I think the government will do another round of spending to help people cope with hikes in gasoline and food prices.”

Kishida has also been calling for stronger wage gains to help households and the economy.

Wages are also a key point of concern for Bank of Japan Governor Haruhiko Kuroda. He has repeatedly cited stagnant paychecks as a missing element that keeps inflation from becoming sustainable beyond a temporary boom in commodity prices. The bank has maintained that its monetary easing program is needed to aid the fragile economic recovery from the pandemic.

The latest figures suggest Kuroda has little reason to pull back from his stimulus settings based on wage growth. The gains are far from the pace he is looking for to help create the positive cycle of wage and price growth that underpins sustainable inflation.

Still, the central bank’s dovish stance has also helped the yen fall to 24-year lows versus the dollar, a factor that is amplifying the cost of more expensive imports. That in turn has meant there’s more commodity price-led inflation that hits households and consumption, while wages fail to keep up with the gain in prices.

Apple Inc. recently hiked the prices of its iPhones and iPads in Japan in a rare move to account for the yen’s precipitous drop in value this year. Meanwhile there are signs that the prices of more and more items in Japan are rising.

“Japanese workers aren’t in the habit of asking for raises that match inflation, because deflation has gone on for a long time,” said Sumitomo Life’s Muto. “Companies and workers tend to focus on job security -- that’s why wage gains are limited.”

(Updates with more details from the release, economist comments)