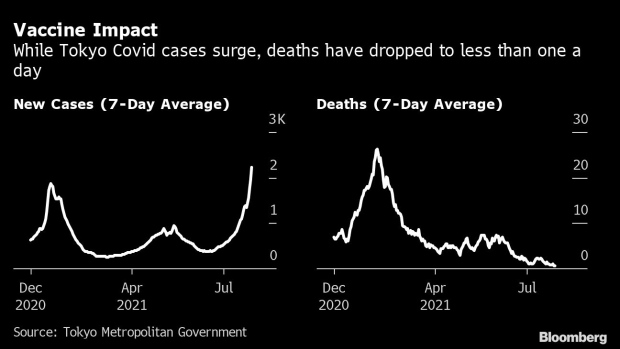 A woman in a wheelchair arrives to receive a dose of the Pfizer-BioNTech Covid-19 vaccine at an inoculation site at Miyakojima Sports Center in Osaka, Japan, on Tuesday, June 1, 2021. After some false starts, Japan’s much-delayed vaccine rollout is quietly picking up steam, now administering between 400,000 and 500,000 doses a day. , via Bloomberg

(Bloomberg) -- The shadow of the Olympics has hung over Japan’s range-bound stock market for months, with some fearing Covid disaster while others have hoped medal wins would help the country mentally move past the pandemic.

With less than a week of the games to go, chances are looking good the Olympics themselves will be considered an achievement. Covid-related disruptions have been minimal, while Japan’s athletes have already taken home a record haul of gold medals.

The market outlook though is mixed, with analysts divided over whether Japanese equities -- which usually get a boost from a rich medal haul -- will rally in the months ahead as vaccination proceed apace. The alternative is that a growing wave of Covid cases and public disillusionment over the handling of the pandemic lead to political instability, worsening the underperformance of Japan’s stock benchmarks.

In a normal year, Olympic gold would see markets follow. Akiyoshi Takumori, chief economist at Sumitomo Mitsui DS Asset Management, noted that for decades the Nikkei 225 Stock Average rose during almost every Olympics in which Japan has achieved double figures in gold medals.

​But the games have come in the middle of a record coronavirus surge, with the public tiring of increasingly ineffective states of emergency. Prime Minister Yoshihide Suga has staked his reputation on a safe handling of the Olympics and the virus, with a party leadership contest in September preceding a general election this autumn.

“With the Olympics being held and cases increasing during that time, there’s the risk that the Suga government gets stuck with this image of having failed to control the pandemic,” said Tomoichiro Kubota, a senior market analyst at Matsui Securities Co. in Tokyo.

Some investors are sounding the alarm for what this means for scenarios that assumed an autumn rebound. The Nikkei 225 is up less than 1% for the year, among the worst-performing developed-market benchmarks tracked by Bloomberg.

“In the worst case, economists might have to rewrite the fall economic recovery scenario,” said Hiroshi Namioka, chief strategist at T&D Asset Management Co. “The approval rating for the Suga administration could fall further as the Olympics was held despite the surrounding issues, which could weigh on Japanese stocks.”

Yet with Tokyo recording a total of just five Covid-related deaths in the past week in a city of 14 million, others say it may be becoming like other capitals learning to live with large infection counts.

“People are looking more at the numbers of serious cases and deaths, though TV talk shows might look differently,” said Tetsuo Seshimo, a fund manager at Saison Asset Management Co. “The situation is totally different to last year.”

That’s thanks to expanding inoculations, with more than 75% of over-65s now fully vaccinated. While polls still indicate most are dissatisfied with the rollout, the government expects more than 40% of the overall population will have had both shots by the time the current state of emergency expires at the end of August.

External factors, which have weighed heavily on Japan’s stocks this year, are also likely to be a factor. China’s regulatory squeeze could give foreign investors there pause, with Japan a potential beneficiary, while SMBC Nikko Securities Inc. analysts Masashi Akutsu and Hikaru Yasuda see Japan benefiting from stronger U.S. job data and a drop in CPI.

“The outlook from September is also brightening in Japan,” they wrote in a July 29 note, citing the expectation that over 50% of the population will be vaccinated by as early as September as well as the likelihood for stimulus ahead of the election. “All these set the stage for domestic recovery from September to October through December.”