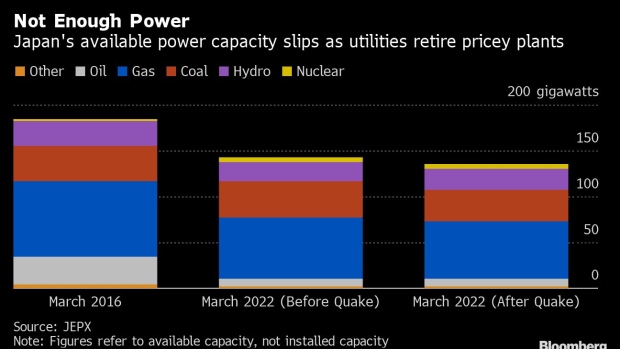 The central control room of Unit 5 in the LNG fired power plant at the the Jera Co. Anegasaki Power Station in Ichihara, Japan. , Bloomberg

(Bloomberg) -- Japan’s worst power crisis in over a decade is a culmination of events starting from the Fukushima disaster, and is an issue that the nation won’t be able to quickly shake.

The world’s third-largest economy has been running on a thinner supply of electricity since the triple meltdown at Fukushima in March 2011 shut its massive fleet of nuclear reactors. Market reforms over the next 10 years aimed at boosting security of supply and making the grid cleaner led to utilities retiring inefficient and dirty power plants, crimping resources further.

That set the background for the current scenario. A strong earthquake last week stretched the power grid, and the situation was made worse on Tuesday by a surprise blast of frigid weather across Tokyo. Solar output dropped and there wasn’t enough gas or coal-fired power plants to make up the difference. Now the region’s top utility is scrambling to avoid a blackout in one of the world’s most advanced cities.

The current crisis would have been “much less severe - perhaps almost a non-event - with more of Japan’s nuclear plants online,” said Dan Shulman, the founder of Japan-based consultancy Shulman Advisory, which advises clients on the nation’s electricity market. The impact of the war in Ukraine on fossil fuel prices and an increased dependence on less-reliable renewables could result in more instability on Japan’s grid, he said.

What’s happening in Japan is playing out across other power grids from Texas to Taiwan. The energy transition and natural disasters are throwing new challenges at utilities, stretching grids and triggering blackouts that threaten economies, especially resource-poor and isolated ones like Japan.

With Japan’s grid so stretched, a future earthquake, extreme weather event or fuel supply disruption could trigger another power shortage even after this immediate crisis subsides.

Japan’s issues can be traced to the magnitude 9 earthquake in March 2011, the biggest ever recorded in the country. A massive tsunami overwhelmed the Fukushima Dai-Ichi nuclear facility, shut off power to cooling systems and led to meltdowns of three reactor cores.

In the immediate aftermath, Japan closed all its 54 reactors that supplied about 30% of its electricity needs. Only 10 have restarted under post-Fukushima safety rules due to strong public opposition and a cumbersome regulatory process. Nuclear power now supplies less than 10% of Japan’s electricity. It’s been replaced by a mix of natural gas, coal and solar facilities.

“The voting public has been against nuclear generation post Fukushima so it is a tough problem for government to solve,” said Antony Stace, a Sydney-based energy trader who closely monitors the Japanese market.

The government was well aware of the dilemma, and sped up liberalization of the power market, with the effort culminating in the 2016 reform to break up monopolies held by regional utilities like Tokyo Electric Power Co. The idea was that more companies would enter the power retail market, increase competition, boost security of supply and ultimately lower electricity rates for consumers.

But there was an unforeseen consequence: In order to gain the upper hand against new competitors, regional utilities were quick to retire backup power plants that were expensive and inefficient as a way to cut costs and provide customers with more attractive power rates. That further tightened available supply, and removed a key piece of emergency infrastructure.

Meanwhile, the biggest competitors to Japan’s regional utilities weren’t so interested in investing in new generation capacity. They were focused on selling retail electricity that they procured either from the spot market or through a purchase agreement with an existing power plant.

Japan had only 142 gigawatts worth of available power capacity before last week’s earthquake, according to data from its electricity exchange. That is 23% lower than in 2016, a few weeks before the market liberalization. Oil-fired power capacity -- the most expensive of the fossil fuels -- dropped by 73% over the same period.

Relief may not come soon. Several coal-fired power plants could remain offline for months, since machinery to load the fuel into the facilities was damaged, according to people with knowledge of the matter. That means Japan will need to purchase spot liquefied natural gas, which isn’t an easy task given that the fuel is facing a global supply shortage.

The longer-term view doesn’t look much better. Japan’s effort to drastically reduce dependence on fossil fuels will leave a gap that renewables can’t easily fill for years. The government last year said it aims for renewable energy to make up a third of the nation’s power generation by 2030, up from its previous target of less than a quarter. Meanwhile, the revised plan cuts gas- and coal-fired power generation by roughly half by the end of the decade.

The plan also requires Japan to restart basically all of its 33 operable nuclear reactors -- a difficult task given the public opposition. Only 10 units have so far resumed. All of this makes it more likely that this week’s crisis could be repeated with the next hiccup.

“Many power plants in the country have been closing,” said Go Matsuo, head of Energy Economics and Society Research Institute in Tokyo. “There needs to be a fundamental shift in how to encourage investment in the area. Investment in large-scale power generation takes seven to eight years to decide, so that means there is an urgency.”