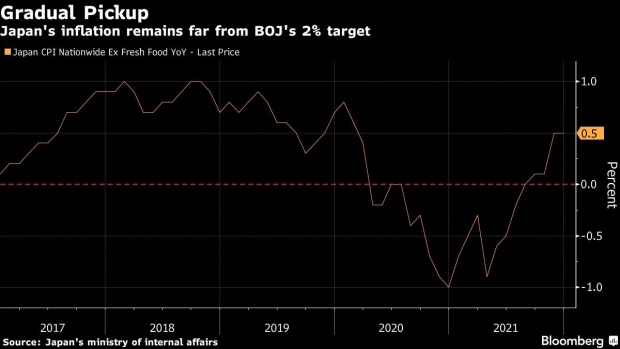 (Bloomberg) -- Gains in Japan’s key consumer prices failed to accelerate toward the Bank of Japan’s target in December, highlighting ongoing weakness in the economy’s inflation pulse in stark contrast to its global peers.

Consumer prices excluding fresh food rose 0.5% in December from a year earlier, according to the ministry of internal affairs Friday. Economists had expected a 0.6% gain.

The subdued inflation reading is likely to further cool speculation that the BOJ may take steps to adjust policy in light of price increases. Governor Haruhiko Kuroda said earlier this week that the start of a normalization of policy is “absolutely not” on the table.

While the central bank said that price risks are balanced for the upside and downside for the first time since 2014, it still only forecasts inflation of around 1% through early 2024.

The Friday data follow reports from the U.S. and U.K earlier this month showing the highest inflation in decades, outcomes that are likely to feed into further divergence in monetary policy to come.

“Looking ahead, we expect core inflation to slow slightly in 1Q 2022. Base effects will probably overcome upward pressure from elevated energy prices and a weaker yen.”

Still, even with muted price gains, Kuroda said it remains important to watch how households and companies react to increasing price pressures arriving from offshore given their entrenched deflationary mindset.

The highest gains in input prices for Japanese businesses in four decades suggest that some passing of higher costs onto consumers is becoming more inevitable.