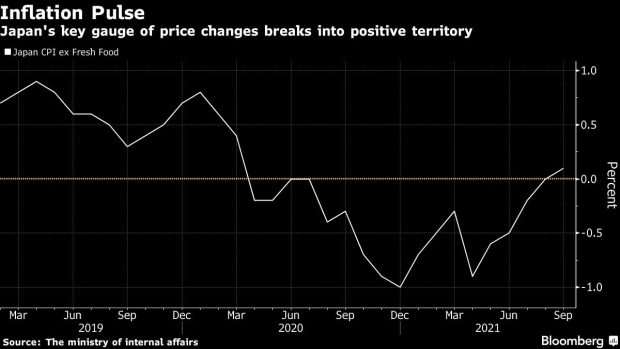 Pedestrians cross an intersection as a Keikyu Corp. train travels on an elevated track in Kawasaki, Japan, on Oct. 16, 2021. Japan is scheduled to release its consumer price index (CPI) figures for September on Oct. 22. Photographer: Takaaki Iwabu/Bloomberg , Bloomberg

(Bloomberg) -- Japan’s key consumer prices rose for the first time since March last year, as higher energy costs supported the Bank of Japan’s view that inflation is set to climb out of the doldrums.

Prices, excluding those for fresh food, edged up by 0.1% in September compared with a year earlier, the ministry of internal affairs reported Friday. The result matched the median forecast from economists.

While Japan’s inflation is still a far cry from the rising levels other central banks are grappling with, prices are seen climbing in coming months as higher energy costs feed through. The nation’s gasoline prices have hit a seven-year high, prompting new Prime Minister Fumio Kishida this week to order his cabinet to monitor developments ahead of this month’s national election.

Energy costs boosted overall prices in September by just over half a percentage point from a year earlier, the greater pace of gains accounting for the rise in the core consumer price index.

Next year, prices should get a tailwind when the impact of government-pushed rate cuts for mobile phones disappear. Cheaper phone services, which mostly started in April, shaved 1.2 percentage point from overall prices, indicating that the inflation pulse outside mobile usage is much stronger than the headline figure indicates.

“Looking ahead, we expect the core CPI to rise 0.2% year on year in October. Higher commodity prices and tax changes are likely to push up prices of several goods and services, including tobacco, electricity, gas, wheat, and dairy products.”

(Adds economist comment and more details from the release.)