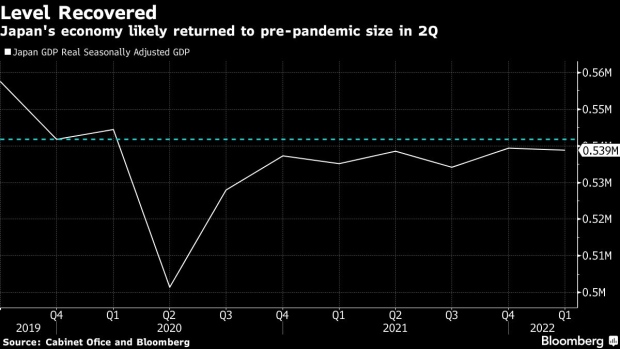 (Bloomberg) -- The world’s third-largest economy is finally set to return to its pre-pandemic size, a result that’s nonetheless unlikely to sway Bank of Japan Governor Haruhiko Kuroda from his commitment to policy easing.

Gross domestic product probably expanded at an annualized 2.7% in the three months through June, economists predicted ahead of data on Monday. The expected moderate recovery from an omicron-impacted first quarter will bring GDP back to its level at the end of 2019.

Yet Japan’s milestone will trail well behind that of the US, which achieved it a year ago, and much of Europe, which regained it at the end of 2021.

While Kuroda has repeatedly cited the struggle to return GDP to its pre-pandemic level as a reason to keep rates ultra-low, persistent weak wages and a darkening global outlook are among factors that are likely to see the BOJ chief stick to this stance.

“The impact on the BOJ’s policy is going to be limited,” said Harumi Taguchi, principal economist at S&P Global Market Intelligence. “The central bank’s view will probably remain that inflation is still weak, and the impact from energy prices will soften over time.”

Kuroda says that recent price gains are cost-push inflation, fueled by surging oil and other commodity imports and exacerbated by yen weakness. The latest BOJ outlook report reflected that view.

“The jump in spending was led by restaurants and hotels, entertainment,” said Naoyuki Shiraishi, an economist at the Japan Research Institute. “There’s a strong appetite for capital investment against a backdrop of high corporate earnings.”

Yet Shiraishi echoes Taguchi’s view that the BOJ is unlikely to be moved until inflation is underpinned by robust wage growth. To date, Japan’s paychecks have trailed inflation, eroding household spending power.

“It’s difficult for the BOJ to change its stance now,” said Shiraishi. “When Governor Kuroda is replaced, that may be the moment to watch out for. We’ll need to keep an eye on the kind of message the bank sends out then.”

The BOJ may have additional reasons to maintain its ultra-low rate stance. Japan is in the midst of a renewed outbreak of Covid-19, with cases topping 200,000 a day in early August. While the government hasn’t reinstated harsh restrictions, merchant sentiment has deteriorated by the most since the winter wave of the virus.

While accelerating, overall inflation in Japan is just 2.4%, well below the 8.5% in the US, 9.4% in the UK and 7.5% in Germany. Still, Japanese firms are under significant pressure from surging raw material costs, with increasing numbers of businesses beginning to pass on the higher costs to consumers.

“Japan still needs to see inflation as a risk,” said Shiraishi, referring to the impact on household consumption. “Daily necessities, food, energy prices have gained quite a bit, and this is eating into people’s purchasing abilities.”