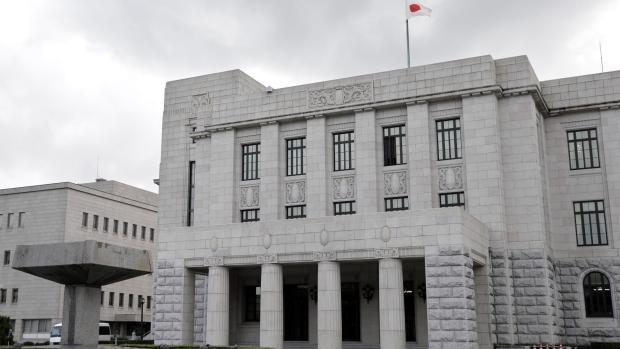 The main entrance of the House of Representatives is seen at the National Diet building in Tokyo, Japan, on Monday, Sept. 7, 2020. Japan’s ruling Liberal Democratic Party is set to vote on its new leader on Sept. 14 and then use its majority in parliament to elect that person as the next prime minister on Sept. 16. , Bloomberg

(Bloomberg) -- Japanese Prime Minister Fumio Kishida’s ruling coalition is expected to keep its majority in a July 10 election for parliament’s upper house that comes as his support has sagged among voters concerned about rising prices and a weak yen, a major newspaper survey said.

Kishida’s ruling Liberal Democratic Party and its junior coalition partner Komeito are expected to win at least 68 of the 125 seats up for grabs and maintain their majority in the body, the poll released Friday by the Asahi newspaper said. A total of 125 of the 248 seats for the body are up for grabs and the LDP-led coalition would need to win at least 56 seats to keep its majority, Kyodo News said.

While the upper chamber holds less power, a convincing victory would allow Kishida to put off another election test for as long as three years and avoid the “revolving door” so many of his predecessors have passed through.

Opinion surveys before the vote have shown a slip in support for Kishida’s government, with opposition groups criticizing the premier for supporting an ultra-loose monetary policy despite worries that it’s accelerating price increases.

But the LDP remains the party of choice for voters who have kept it in power almost continuously since its formation in 1955 and see it as offering a steady hand in guiding the world’s third-largest economy.

The central bank’s persistent easing has come under criticism as it’s helped the yen slide to a 24-year low, which is boosting the import costs of food and energy for households. Data released Friday showed that a key inflation gauge stayed above the Bank of Japan’s target level of 2%, a result that keeps speculation alive over policy adjustments at the central bank.

With the election in mind, Kishida has already unveiled a raft of inflation relief measures to keep a lid on price gains. The government estimates the steps, including subsidies on gasoline, will shave 0.5 percentage point off overall consumer prices from May through September.