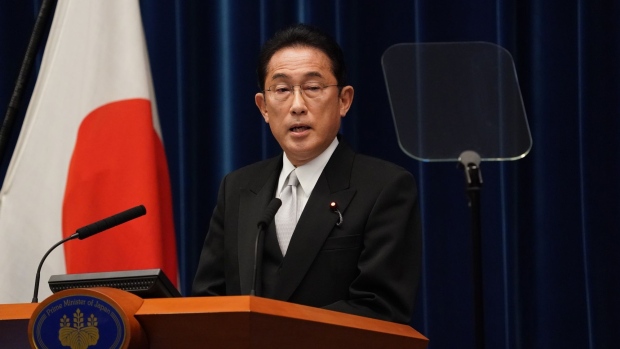 (Bloomberg) -- Japan’s long-ruling Liberal Democratic Party is likely to keep its parliamentary majority in the Oct. 31 general election, according to a large-scale poll conducted by Kyodo News.

Several other media outlets carried out similar surveys, all indicating the LDP and its junior coalition partner Komeito were likely to retain a majority of the 465 seats up for grabs in the election for the powerful lower house.

In a survey of 174,000 people by phone on Tuesday and Wednesday, Kyodo found the LDP is set to win at least 233 seats, compared with 276 before parliament was dissolved. The ruling coalition had more than 300 seats between them.

Prime Minister Fumio Kishida took office at the start of the month and any major reduction in party numbers could put his leadership in jeopardy, potentially propelling him through the “revolving door” through which six premiers were dispatched between 2007-2012. He also faces an upper house election next year, which will be key to smoothing the path for his legislative program.

Kishida has campaigned on pledges to raise incomes, narrow disparities in society and provide a massive stimulus package to help a Covid-battered economy. Polling results so far indicate the main opposition Constitutional Democratic Party is struggling to attract support, despite an alliance with other small parties and tepid public approval for Kishida.

An opinion poll published by the Asahi newspaper put support for Kishida’s cabinet at 41%, down on 45% in a previous poll two weeks earlier. However, when asked to choose the more appropriate premier, 54% of respondents opted for Kishida, compared with 14% for CDP leader Yukio Edano. About 58% of respondents said the opposition CDP was not capable of running the government.

The election comes as the government seeks to revive the economy, with daily recorded virus infections dwindling to less than 500, and 68% of the population fully vaccinated -- among the highest in the Group of Seven nations.