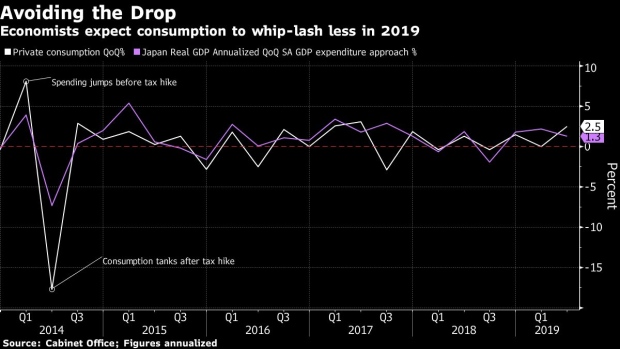 (Bloomberg) -- The boost to Japan’s economy from shoppers splurging before last month’s sales tax hike was likely smaller than in 2014, when a previous increase triggered a boom and bust in consumption.

Economists say third-quarter growth figures due Thursday will show pre-tax-hike consumer spending and robust business investment kept the economy expanding as it struggled to maintain momentum amid the global slowdown.

Analysts surveyed by Bloomberg estimate that gross domestic product grew at an annualized pace of 0.9% from the previous quarter, slowing from a 1.3% gain in the three months to June.

While private consumption is expected to be one of the biggest drivers of growth, the gain is forecast at less than a third of the size of the equivalent bump in spending five years ago, when whip-lashing consumption triggered a sharp contraction of the economy after the tax hike.

Analysts are betting that policies put in place by the Abe administration to buoy spending, including tax breaks on car and home purchases, will succeed in minimizing the economic damage this time around.

A less dramatic spending gain in Thursday’s report will be welcome news given the economy’s vulnerable position. The U.S.-China trade war and a global tech slump have battered Japan’s exports, making the economy more dependent on stable domestic demand to generate growth.

Economists forecast the economy will shrink 2.7% in the three months through December, before bouncing back in the new year. GDP contracted 7.3% in the quarter following the 2014 tax hike and it took a full-year to regain the losses.

The other question is how long companies will continue to ramp up spending without clear signs of a pickup in global growth.

In the July-September period capital spending by businesses is estimated to have risen at the fastest pace in three quarters. The expected increase reflects spending by companies such as FamilyMart Co. on computers and labor-saving equipment to help boost productivity in the face of chronic worker shortages.

“Looking ahead, the economy is set to pull back in 4Q, as the higher sales tax takes a toll on spending. We expect a sharp slowdown next year, with heavy drags from consumer spending and exports.”

To contact the reporter on this story: Yoshiaki Nohara in Tokyo at ynohara1@bloomberg.net

To contact the editors responsible for this story: Malcolm Scott at mscott23@bloomberg.net, Jason Clenfield, Paul Jackson