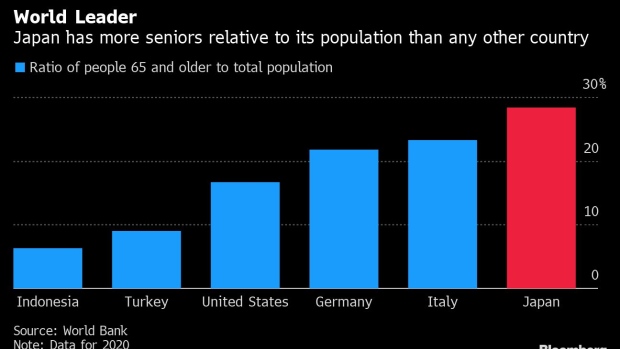 (Bloomberg) -- Japan is using the corporate bond market to tackle the challenge of having the world’s oldest population.

Daiwa Securities Living Investment Corp. became the latest issuer to tap the market for social debt on Tuesday with the sale of a 10-year bond to refinance investments in facilities for the elderly at a coupon of 0.46%.

The Japanese government is looking to boost more social bond issuance from the corporate sector. With a bigger proportion of senior citizens relative to the population than any other country, a growing need for more nursing homes and a better safety net for the elderly will increasingly drive demand.

“There will be more social bonds whose proceeds are earmarked for services linked to elderly services, education and healthcare,” said Kazushi Shimizu, head of the sustainability solutions department at Daiwa Securities Co.

Also on Tuesday, the Tokyo Metropolitan Government said it will use the funds raised via its planned social bond for programs linked to disaster prevention measures as well as helping children with special needs and the elderly.

But yields on Japanese government bonds with the same tenor have risen, tracking a rally set off by the prospect of U.S. monetary policy tightening.

“It’s not a big issuance amount so there’s probably enough demand but the spread is tight so this deal is not offering attractive returns despite the higher coupon,” said Masayuki Tsujino, senior fund manager at Asahi Life Asset Management Co.