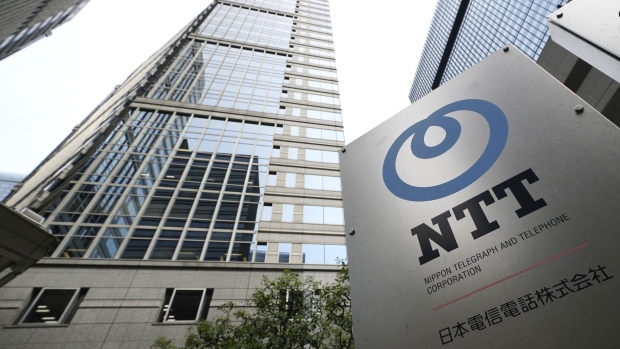 Signage is displayed outside the Nippon Telegraph and Telephone Corp. (NTT) headquarters in Tokyo, Japan, on Tuesday, Sept. 29, 2020. NTT's plan to make its wireless unit wholly owned increases the chances it will comply with calls from Japan’s new premier for lower mobile fees, forcing rivals to follow suit, according to some analysts. Photographer: Toru Hanai/Bloomberg , Bloomberg

The company’s financial unit, NTT Finance Corp., sold 300 billion yen ($2.6 billion) of green notes in a three-part deal, according to underwriter Nomura Securities Co. It is the biggest offering ever of environmentally-friendly debt in Japan, according to data compiled by Bloomberg.

Companies and governments around the world have sold about $438 billion of green bonds this year, a record for any full-year period and more than double the year-earlier amount, according to data compiled by Bloomberg. Issuers of ESG debt face a more challenging regulatory environment as authorities from Europe to the U.S. seek to toughen rules to ensure that claims around such debt are verifiable.

The proceeds of NTT’s bond sales will go to green projects including spending on renewable energy and investments in fifth-generation wireless technology, the company said previously. With firms coming under pressure to bolster their commitment to environmental goals, NTT aims to cut carbon emissions by 80% by fiscal 2030 from 2013 levels, according to the company.

Offerings of environmental bonds exceeding $2 billion by regular companies that aren’t banks are relatively rare, though Volkswagen AG and Apple Inc. both priced deals of 2 billion euros each ($2.3 billion) in recent years.