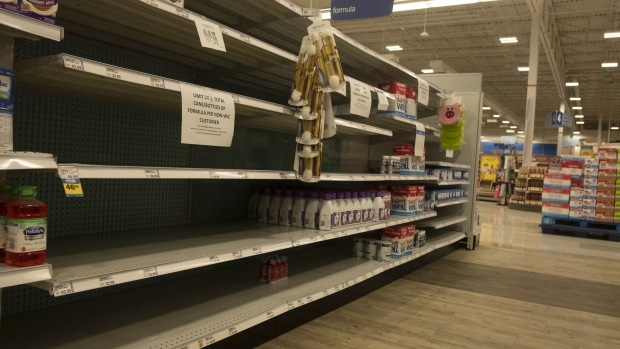 A sign in front of empty shelves notifies customers that they are allowed only one container of baby formula at a store in Provo, Utah, US, on Tuesday, May 17, 2022. President Joe Biden said he expects increased imports of baby formula to relieve a US shortage “in a matter of weeks or less,” as pressure mounts from parents and lawmakers to address the problem. Photographer: George Frey/Bloomberg , Bloomberg

Japan’s largest maker of baby formula has applied to the Food and Drug Administration for authorization to export to the US, including specialized formula and its portable cube-shaped powder milk, Shinichirou Tanaka, manager of Meiji’s global infant nutrition business, said in an interview.

Parents in the US are struggling to find baby formula amid a nationwide shortage, prompting President Joe Biden to invoke emergency powers under the Defense Production Act to speed production of formula and use government planes to import ingredients and formula. At the same time, the deaths of infants suspected to be tied to contaminated formula earlier this year has also fueled concerns over the quality of products.

“The opportunity rolled in unexpectedly, and we really want to give it a try,” Tanaka said, adding that the cost and quality of Meiji’s products are competitive. A container of 800 grams (28 ounces) of formula costs about $15 in Japan, while a 12.5-ounce can of Abbott’s Similac retails for about $17.50 on Walmart Inc.’s website. “We are scraping together inventory for the US market.”

The FDA has temporarily relaxed its rules until Nov. 14 to import more supplies of powdered milk. Global baby formula providers including Nestle, Danone, and Abbott Laboratories have already secured permission to sell formula manufactured overseas in the US. The current environment provides a good entry point for brands outside of the country to gain access into the lucrative market, according to Bloomberg Intelligence analyst Ada Li.

“If the regulator approves entry, there will be opportunity for new entrants like Meiji,” Li said. Even so, “it will be incredibly difficult to compete head-on with giants such as Reckitt Benckiser Group Plc, Abbott and Nestle, which have dominated the US market for decades,” because demand for baby formula is very sticky and consumers don’t easily switch products, she said.

Meiji, which has been focusing on expanding sales in Asia, sees a chance to build a new source of income. In its home market of Japan, the nation’s low birth rate has translated into shrinking sales of powdered milk for babies. Even so, Meiji’s nutrition business, which includes formula and liquid food for the elderly, grew 7.8% to 110 billion yen ($806 million) for the fiscal year ended March, making up 11% of total revenue.

Meiji also sells baby formula in Asia, including in Vietnam and Taiwan. The company, which also manufactures and markets dairy products, chocolates and beverages, is planning to export to the US powdered milk made at its factory in Saitama, Japan, which meets international food standards.

“We make high quality products at relatively low cost,” said Tanaka, who declined to disclose the volume of anticipated shipments, but said pricing in the US will probably be at least twice that of Japan. “Our industry standard for quality controls is much higher than food, as good as for medicines, because the weather in Japan makes bacteria grow fast.”

Japan’s baby-formula quality control standards are high, after a scandal in the 1950s when arsenic in Morinaga Milk Industry Co.’s baby formula was believed to have resulted in the deaths of more than 100 infants.

Meiji has been seeking new opportunities for growth abroad. Currently, the company can’t sell its products in China, the world’s largest market for baby formula, because the country banned imports of milk products from Japan after the Fukushima nuclear disaster, caused by an massive earthquake in 2011.