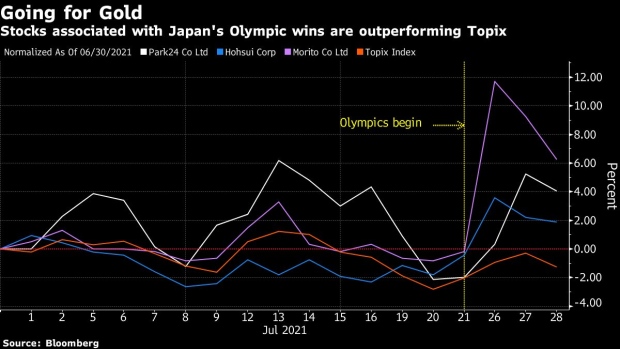 (Bloomberg) -- With Japan’s Olympic team outperforming all expectations at the Tokyo Games so far, some unlikely stocks in the host nation are seeing the benefits.

In an Asian stock market pummeled by a Chinese regulatory crackdown this week, Japan’s haul of 11 gold medals is lifting everything from real estate stocks to the shares of seafood vendors with the most tenuous of links to the medalists. Park24 Co. -- a car park and vehicle-sharing operator -- is up over 6% this week after Japan’s judo team, many of them employees of the company, won every men’s gold medal so far as well as multiple women’s medals.

Five days into the event, the Japanese find themselves in the unlikely position of being top of the medals table, already winning more golds than in the London or Beijing Olympics and on course to top its record tally from the 2004 Athens Games. That success has led retail investors in particular to look for trading angles.

Colan Totte Co., a recently listed maker of health goods, surged 23% on Monday. It sponsors Mima Ito, the table-tennis player who together with Jun Mizutani made up the mixed-doubles table tennis team that stunned the world by beating China in the final. Starts Corp. and Mizuno Corp., which both sponsor Ito, also saw gains this week.

Shares in Morito Co., which distributes skateboarding gear, jumped 12% the same day after Japan won golds in the newly added event. The firm was quick to issue a release to the Tokyo Stock Exchange the next day, highlighting its range of goods for skating and surfing.

And in perhaps the most opportunistic gain, frozen seafood-seller Hohsui Corp. rose the most in almost a year on Monday after its logo was prominently visible in the background of the skateboarding medal ceremonies shown on TV at the Ariake Urban Sports Park.

But investors beware -- the gains can be short-lived, and even the surest thing can be a risky bet. Yonex Co., which makes Naomi Osaka’s tennis racquets, has slumped 8% in two days after the superstar unexpectedly crashed out of the tournament in the third round on Tuesday.