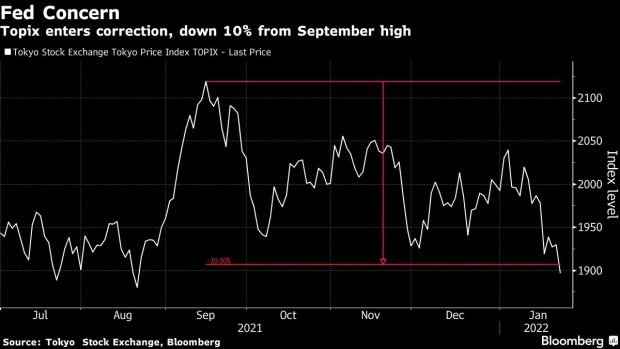 The Topix index fell 1.7% on Tuesday to close 10% below its September high. Global stock volatility has climbed with the Fed expected to signal this week that it will lift rates in March. Meanwhile, risk-off sentiment deepened as the U.S. put troops on alert for deployment to bolster NATO forces if needed as Russian troops mass on Ukraine’s borders.

Ukraine-related market risk “has become a bit more real now,” said Naoki Fujiwara, chief fund manager at Shinkin Asset Management. However, “economic data for January haven’t been good, and with the omicron variant and the Ukraine situation hanging, it’s possible for the Fed to show a less hawkish than expected stance.”

Electronics makers and service providers were the biggest drags on the Topix, which closed at its lowest since Aug. 20. SoftBank Group Corp. Group and Tokyo Electron Ltd. were the largest contributors to a 1.7% loss in the Nikkei 225 Stock Average.

Despite the recent drop, Japanese equities have held up better than global peers, helped by its heavy weighting of stocks expected to benefit from the economy’s recovery. The Topix is down 4.8% so far this year, compared with a 7.5% loss in the S&P 500 Index and 6.6% drop in the MSCI All-Country World Index.