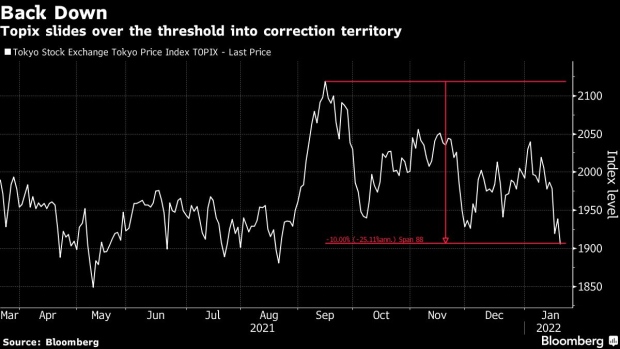 (Bloomberg) -- Japan’s Topix index is set to follow the technology-heavy Nasdaq 100 into a correction amid concerns over the potential for monetary policy tightening in the U.S. and the global struggle to contain the pandemic.

The Topix fell as much as 1.8% on Friday, extending its decline to 10% from a 31-year high marked in September. The Nasdaq 100 erased a near 2% rally before ending in the red on Thursday, while the S&P 500 remained more than 5% off its January high.

“Market instability will likely persist into March, until investors see the outcome of the U.S. Federal Reserve’s meeting for the month,” said Toshiaki Iwasaki, an analyst at Mito Securities Co. in Tokyo.

Japan’s stock benchmark is set for weekly slump of 3.6% as Tokyo and other parts of the nation prepare to come under a state of quasi-emergency for three weeks amid a Covid surge. Reintroducing curbs on businesses could chill the economy, particularly if hospitalizations continue to rise and a full state of emergency is declared.

The Nikkei 225 Stock Average, which entered a correction in October, fell 1.9%.