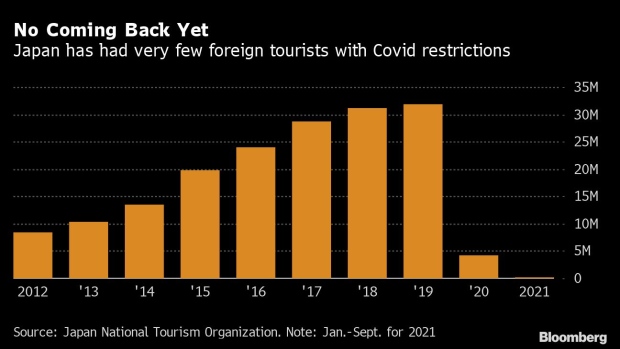 Sheets of Japanese 10,000 yen banknotes move through a machine at the National Printing Bureau Tokyo plant in Tokyo, Japan, on Monday, May 20, 2019. Japan’s unexpected growth spurt on the gross domestic product (GDP) in the first quarter masked weakness in the economy just as policy makers prepare to hike the sales tax in October. Photographer: Akio Kon/Bloomberg , Bloomberg

(Bloomberg) -- The gains for Japan’s economy from a weaker yen are likely to be smaller than in the past given the pandemic-induced tourism vacuum.

The latest figures for September again show the number of foreign visitors at minimal levels, with entrants down 99.2% compared with the same month in 2019. The data came out Wednesday just hours after the yen hit 114.70, its lowest level against the dollar in almost in four years.

Before the tough border restrictions of the pandemic, a weaker currency helped boost tourist numbers over time, helping pour money into Japan’s regions, as visitors took advantage of their enhanced purchasing power.

A softer currency is generally seen as beneficial for Japan’s economy given its export strength, but for more domestic-orientated businesses and the service sector, the weaker yen can be less appealing as it means higher fuel costs and import prices with no gains from spending by overseas visitors.

The number of visitors surged by almost 50% in 2015, the highest growth rate to date, when the currency averaged 120 against the dollar. With pre-pandemic Japan largely on track to reach a government goal of 40 million tourists by 2020, hotels, restaurants and tourist venues expanded capacity -- now largely unused.

When Bank of Japan Governor Haruhiko Kuroda said he didn’t expect the yen to weaken further in real terms in June 2015, the remarks were interpreted by market players as an indication that policy makers saw the 125 level at the time as the limit of desirable yen weakness.

Without the tourism boost to the economy, the pain level of yen weakness could come well before that.