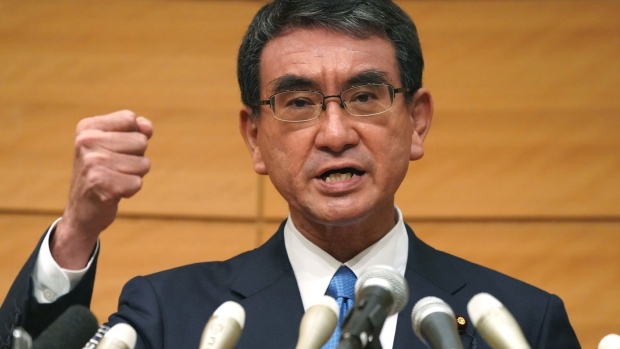 (Bloomberg) -- Japan’s vaccine czar, Taro Kono, is by far the most popular of four candidates set to run in the ruling Liberal Democratic Party’s leadership election this month, a survey of party members and supporters found.

Kono was favored among 49% of respondents in a Kyodo News poll taken Sept. 17-18. In second place was former foreign minister Fumio Kishida with 19%, followed by Sanae Takaichi  with16% and Seiko Noda with 3%.

The four lawmakers will stand in the LDP leadership vote set for Sept. 29, which follows Yoshihide Suga’s Sept. 3 announcement that he would step down as Japan’s prime minister. The party leader is virtually assured of becoming premier because of the LDP’s dominance in parliament.

Kono has signaled he’d take a different approach to economic policy if he’s elected. He’s noted in campaign speeches that he wants to reorient economic strategy toward individuals and questioned whether Japan’s long-standing 2% inflation target is achievable.

The poll received responses from 1028 party members and party-supporters who claimed to be eligible to vote. Kyodo didn’t give a margin of error for the survey.