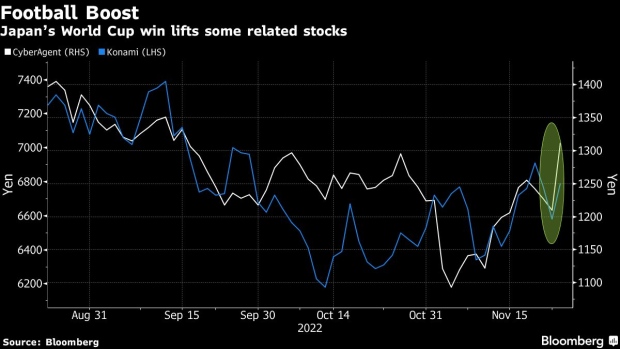 (Bloomberg) -- Shares of some sports and entertainment companies jumped in Tokyo after Japan’s surprise win over Germany in a World Cup match.

CyberAgent Inc., which is broadcasting all the games for free in Japan on its Abema streaming service, surged 6.9%, the most since April 28. Konami Group Corp., which makes soccer-related videogames, closed 1.8% higher.

“It adds a touch of glamor to the market just ahead of the year-end, and the market welcomes it,” said Shoichi Arisawa, general manager at Iwai Cosmo Securities Co. Particularly retail investors will be hunting for related names, as long as Japan keeps winning, he added.

While stocks were rising, some locals were apparently hoping the nation might follow Saudi Arabia’s move to declare a day off after the Middle Eastern nation delivered another major World Cup upset, beating Argentina. “It should be a national holiday” was trending among Japanese language tweets on Thursday.

Japan rallied to beat perennial powerhouse Germany 2-1 in the first match for each team in this year’s tournament in Qatar. Japan’s next game in the group stage is against Costa Rica on Sunday.

--With assistance from Shoko Oda and Isabel Reynolds.