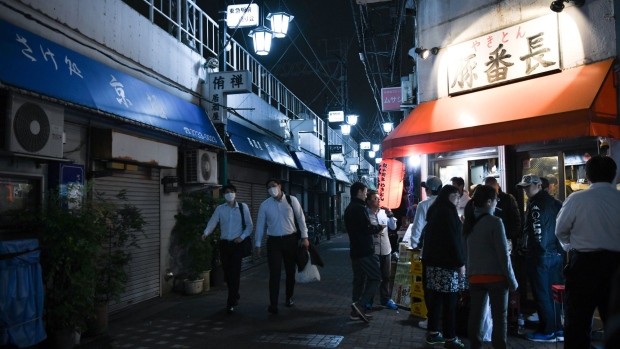 People wearing protective face masks walk past a restaurant at night in the Kamata district of Tokyo, Japan, on May 22, 2020. The Bank of Japan launched a new lending program worth 30 trillion yen ($279 billion) to support small businesses struggling amid the coronavirus but held off from adding major stimulus at an emergency meeting Friday. Photographer: Noriko Hayashi/Bloomberg , Bloomberg

(Bloomberg) -- Japan’s government maintained its view that the economy continues to worsen sharply even as a nationwide state of emergency was lifted this week allowing businesses to start the slow process of reopening from shutdowns.

Activity will resume gradually but “an extremely severe situation is expected to continue,” the Cabinet Office said Thursday in a monthly assessment that described the overall economy for a second month as worsening rapidly.

Weakness in the jobs market is increasing, the Cabinet Office said in cutting its view of employment conditions. Business investment, which had been flat, is now showing signs of weakness, it said in another sectoral downgrade. The government also cut its view of exports, saying they are worsening rapidly.

The grim report came a day after Prime Minister Shinzo Abe’s government unveiled a $1.1 trillion stimulus package that doubled the size of Japan’s total coronavirus-relief measures to about 40% of gross domestic product.

Data last week showed Japan had already fallen into a recession last quarter and analysts see GDP shrinking far more this quarter. Exports fell by more than a fifth in April as lockdowns in key markets choked off demand for Japanese cars and auto parts.

In one small hopeful sign, the Cabinet Office raised its assessment of imports for May. Shipments from Asia have started to show signs of bottoming, it said.