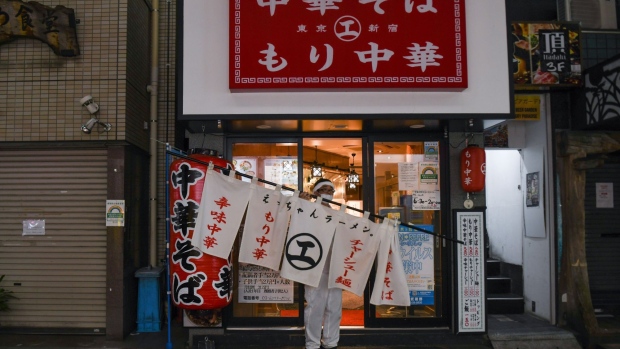 An evening commuter in the Shinjuku district of Tokyo, Japan, on Thursday, July 29, 2021. While the number of infections directly connected with the Olympics has so far been relatively low, Tokyo and its surrounding areas are experiencing their worst-yet virus wave. Photographer: Noriko Hayashi/Bloomberg , Bloomberg

(Bloomberg) -- Japan is seeking to expand a state of emergency in Tokyo to surrounding areas, as well as Osaka, and extend it to the end of August, as the country struggles with a record virus wave even as it hosts the Olympics.

Economy Minister Yasutoshi Nishimura sought advice from an expert panel on the plan, which is set to be made official later Friday. Prime Minister Yoshihide Suga will give a press conference on the situation at 7 p.m. Japan time.

The expansion comes after three straight days of record Covid-19 infections in Tokyo and as national figures soared over 10,000 for the first time since the pandemic began about 18 months ago. Japan has so far suffered far fewer Covid deaths than other Group of Seven nations. About 27% of its population is fully vaccinated, including more than 70% of those aged 65 or above.

Experts have warned the health care system is coming under strain, and a group of medical organizations including the Japan Medical Association on Thursday gave a press conference to call on the government to consider expanding the emergency across the whole country, NHK reported.

The government’s plan is to add three prefectures adjacent to Tokyo -- Chiba, Saitama and Kanagawa. The southern island of Okinawa, which is also seeing record infections, is already under similar measures.

The emergency in Tokyo has meant bars and restaurants are being instructed to stop serving alcohol and to close by 8 p.m. Public fatigue with the measures has set in, and some establishments are ignoring the rules, despite the risk of fines, while groups of people are also gathering to drink in public places.

Reported cases directly linked to the Olympics have remained relatively low, though some athletes, including a champion U.S. pole vaulter, have dropped out of the games after testing positive.