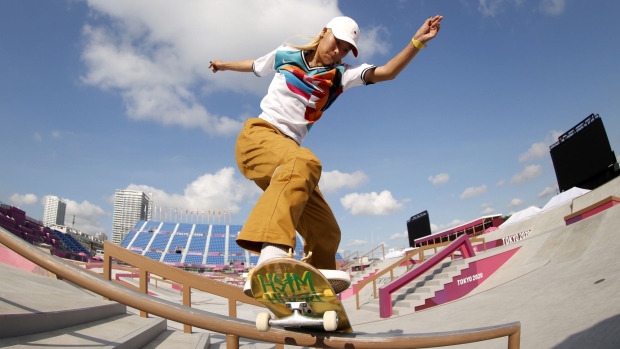 (Bloomberg) -- Japanese skateboarder and medal contender Aori Nishimura is hoping that the sport’s debut at the Tokyo Olympics, and the success of homegrown athletes like herself, can help overcome some of the stigma that skateboarding often carries in the host nation.

“I do think it’s more difficult for people that want to skateboard in Japan compared to overseas,” Nishimura, who turns 20 next week and lives in Huntington Beach, California, said. “I realized it when I first went overseas -- you can skate in the streets and people will be like “‘wow, cool.’” In Japan, “the image of skateboarding still isn’t great.”

Nishimura, who is ranked No. 3 in the world in street skateboarding -- a style that involves doing tricks over structures often found in urban areas like railings and steps -- will compete on Monday, and is favored to win a medal after finishing first in the Street Skateboarding World Championships in Rome last month.

Her success could help shift attitudes in Japan, where skateboarding is widely seen as an unruly pastime associated with rebellious youths, and is prohibited in many public spaces. Many skateboarders in Japan have experienced being stopped or questioned by the police for their hobby.

“Success in the Olympics tends to attract attention and lead to popularity in Japan,” said Yuji Ishizaka, a sports sociologist at Nara Women’s University, who researches the Olympics. “If Nishimura does well, it could help change the perception of skateboarding in Japan.”

Despite public apathy, Japan has produced a number of high-profile skateboarders, including Yuto Horigome, who is also favored to win a medal in the male street skateboarding event. Japan will also field its youngest-ever Olympian in 12-year-old Kokona Hiraki, who will compete in the women’s park skateboarding event.

Olympics organizers too have a lot riding on the success of skateboarding. By adding disciplines like skateboarding, surfing, sport climbing and karate in the Tokyo games, they’re betting on younger audiences in order to stay relevant amid international criticism of the event that has intensified as the pandemic progressed.

More gold medals for Team Japan would also help local organizers distract from the evolving public relations debacle around the games, including the firing of the opening ceremony director on the eve of the event and daily reports of new Covid infections linked to the Olympics.

Nishimura -- who in 2017 was the first Japanese female to win gold in street skateboarding at the X Games and is now a playable character in Tony Hawk’s video game -- is pushing up against deeply entrenched gender norms in Japan. Female athletes still tend to receive questions about their private lives or if they like cooking when doing interviews, Ishizaka said. While women have won more Olympic gold medals than men in Japan, TV sports coverage still overwhelming centers around male athletes, he added.

For Nishimura, who started skating at eight after finding an old skateboard belonging to her father at home in Tokyo, skateboarding is one arena in which she doesn’t feel society’s strict hierarchy.

“In skateboarding environments, I’ve never felt uneasy or like this is not the place for me,” Nishimura said. “People around my parents have commented to them about me skateboarding even though I’m a girl. When I first heard it I was surprised people thought like this.”

Nishimura’s sentiments are shared by other young skateboarders.

“Skateboarders don’t care if you’re young or old, female or male, it’s one of the best things about it,” said Norihiro Uchida, a 23-year-old recent college graduate working in northern Japan. He skates as a hobby.

Skateboarding has increased in popularity in Japan in recent years and there are now more skate parks, said Satoru Kawasaki, a representative for the Japan Skate Park Association. Still, he said it would be better if enthusiasts could skateboard in more public areas instead of skate parks, which may be intimidating for novice skateboarders.

The pandemic may also have given a boost to skateboarding, Kawasaki said. “This is an individual sport, so it’s something you can do while keeping distance from others.”