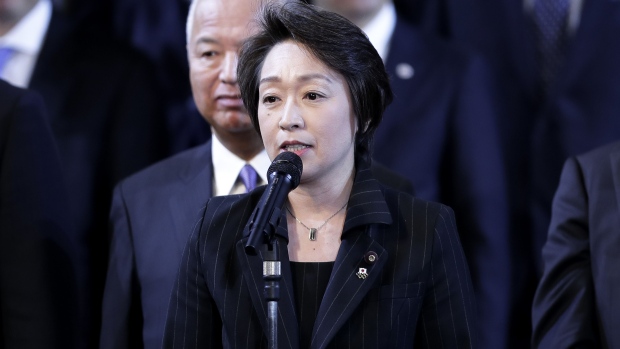 (Bloomberg) -- A deepening feud between Japan and South Korea threatened to undercut next year’s Olympic Games in Tokyo, as the two sides sparred over whether spectators could wave “rising sun” flags associated with Japan’s militarist past.

New Japanese Olympics Minister Seiko Hashimoto -- herself one of the country’s best-known Olympians -- on Thursday rejected South Korea’s call to ban the flag as political propaganda. “On the issue of whether the rising sun flag conveys a political message, I don’t see it that way at all,” she said.

South Korean Culture Minister Park Yang-woo wrote to the International Olympic Committee this week comparing the flag to the Nazi swastika and pressing for it to be kept out of Olympic venues. The rising sun with rays -- distinct from the modern Japanese national flag of a red sun on a white field -- was used by the Imperial Army during its invasion and occupation of swaths of Asia.

The rising sun motif is still used by the postwar Maritime Self-Defense Force, and Japan pulled out of a naval review around the South Korean southern island of Jeju last year after Seoul said the current MSDF variation should not be flown. The imperial-era flag is also favored by right-wing groups in Japan.

The flag tussle is the latest outbreak in a deepening feud between two of Asia’s largest economies, which has already seen South Korea raise questions about food safety at Olympic venues. Their disagreements largely stem from differences in perception as to whether Japan has shown sufficient contrition for its 1910-45 colonization of the Korean Peninsula.

Souring ties have prompted Japan to tighten control over exports to South Korea of specialty materials vital to its massive tech industry. South Korea has challenged the move with the World Trade Organization, while vowing to retaliate with similar measures.

Why Japan and South Korea Have Their Own Trade War: QuickTake

South Korea has also announced it will drop a military intelligence-sharing agreement with Japan, a move U.S. officials saw as disappointing. The flag spat shows how the dispute could soon spill into the 2020 Olympics, which Japan has billed as the “recovery games” to showcase its rebound from the 2011 tsunami and Fukushima nuclear disaster.

“Sure, the South Koreans are playing politics as we would expect,” said Jules Boykoff, a professor of politics at Pacific University in Oregon and author of a book on the political history of the Olympics. “But the recovery games are not all they are cracked up to be. Those claims deserve a little bit of healthy skepticism.”

Prime Minister Shinzo Abe has set a target of welcoming 40 million tourists to the country during the Olympic year. South Koreans have generally made up the second-largest group of visitors to Japan after Chinese, and visitors from the country declined 7.6% year on year in July.

South Korean officials have summoned a Japanese diplomat to express concern about a planned release of treated radioactive water into the ocean by Tepco, the operator of the plant that caused the nuclear disaster. The officials are also pushing for independent radiation checks at Olympic venues and proposing a separate cafeteria for their athletes, citing concerns about contaminated food.

Earlier last month, some South Korean politicians even raised the idea of an Olympic boycott, the Hankyoreh newspaper reported at the time, something no national team has done since a North Korean-led group of countries skipped the Seoul Olympics in 1988. Such a move may not go down well with South Koreans -- U.S. athletes are still bitter over the 1980 boycott of the Moscow Games -- and would hurt the country’s prospects of hosting the event in future, Boykoff said.

“South Korea has made noise about a joint bid for 2032 with North Korea,” he said. “That would be the death knell for any future bid with the IOC.”

To contact the reporters on this story: Isabel Reynolds in Tokyo at ireynolds1@bloomberg.net;Jihye Lee in Seoul at jlee2352@bloomberg.net