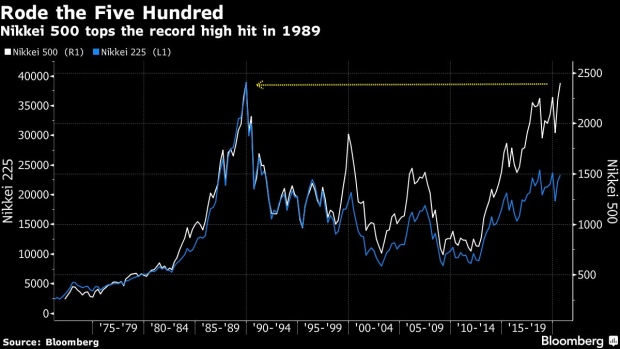 A pedestrian is reflected in an electronic stock board outside a securities firm in Tokyo, Japan, on Friday, Jan. 12, 2018. Japanese stocks declined after the yen remained stronger against the dollar and a technical indicator signaled the recent run-up to the highest level in 26 years was excessive. Photographer: Tomohiro Ohsumi/Bloomberg , Bloomberg

(Bloomberg) -- Japan stocks have finally recovered to top the all-time high set at the peak of the 1980s bubble era, at least according to one measure of the country’s equities.

The Nikkei 500, an index that includes 275 more companies than the benchmark Nikkei 225 Stock Average, rose to a record on Monday, topping the closing high in December 1989. It comes even as the Nikkei 225 continues to languish far below the 38,915.87 record close also reached that year, despite more than seven years of unprecedented monetary easing. The blue-chip gauge is down 0.6% so far this year, while the Nikkei 500 has added 7.7%.

Many of the gains in the broader 500 index come from companies which aren’t included in the Nikkei 225. Nintendo Co., up 37% this year on the back of an unprecedented pandemic-induced surge in demand for its Switch console, has contributed the majority of the index’s returns this year. Keyence Corp., a maker of industrial automation systems that at one point was the country’s most valuable company after Toyota Motor Corp., was the second-largest contributor. Another industrial automation name, SMC Corp., and furniture depot Nitori Holdings Co. also added to the rally, and aren’t represented on the Nikkei 225.

While the blue-chip 225 index may have risen 42% since its March lows, it isn’t representative of the health of Japan’s broader market, according to Seiichi Suzuki, a market analyst at Tokai Tokyo Research Institute Co.

“The companies that have not been chosen to be in the 225 -- the 275 other stocks -- are doing better,” said Suzuki. “If you broaden your scope and look at 500, Japanese equities are doing well.”

The Nikkei 225, which like the 500 is a price-weighted index, is frequently criticized for failing to function as a true reflection of Japan’s equity market. One company, Fast Retailing Co., makes up more than 10% of the gauge, with shares in the Uniqlo maker almost flat for the year. While Fast Retailing is also the largest component of the Nikkei 500, it makes up only 3.6% of that index, according to data compiled by Bloomberg.

“There’s a significant market impact when high-priced stocks get placed into the Nikkei 225 during rebalancing,” said Keiichi Ito, chief quants analyst at SMBC Nikko Securities Inc. “So it’s harder to place a lot of these newer firms, who often have higher stock prices, into the gauge. It means that older companies tend to stick around in the index.”

The alternative benchmark, the Topix, meets with different criticism for being overly broad. It contains around half of the listed stocks in Japan, many of them small and illiquid, something Japan Exchange Group Inc. aims to address with index reforms proposed for next year.