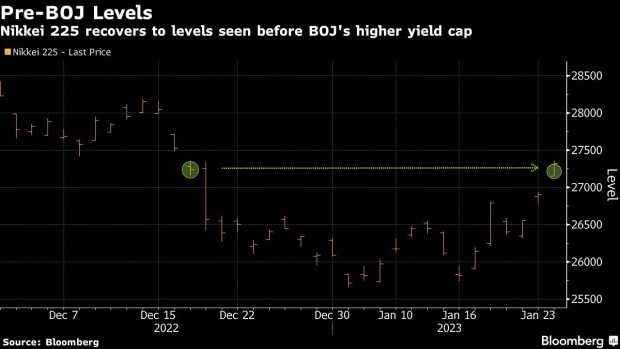 (Bloomberg) -- Japanese stocks made a full recovery from the Bank of Japan’s surprise revision to its yield-curve-control policy last month.

Both the Topix and Nikkei 225 Stock Average closed above levels seen prior to Dec. 20, when the BOJ abruptly doubled its cap on Japan’s 10-year bond yield to 0.5%. With the BOJ’s latest decision to leave policy unchanged on Jan. 18, exporters are starting to recover as the yen’s strength against the dollar subsides. Since the latest meeting, Topix gauges that track automakers and electronics companies have rebounded more than 2% each.

Exporters are now moving higher with banks, which have surged 18% since the BOJ’s December decision. An increase in 10-year bond yields to a 7 1/2-year high earlier this month has improved prospects for financial firms that have seen their interest income crushed by years of rock-bottom rates as central bank Governor Haruhiko Kuroda sought to spark inflation.

“There is a strong possibility that the BOJ will not make any major changes while Governor Kuroda remains in office,” said Tomo Kinoshita, a global market strategist at Invesco Asset Management Japan. “Concerns about the BOJ in the stock market have receded a bit and focus is now on Japanese fundamentals.”

The BOJ’s efforts to ease concerns over a potential tightening of policy have also helped improve sentiment. It saw strong demand for its low-interest loans-for-bonds program Monday, with proceeds expected to be plowed into government debt and help keep a lid on yields.

“The BOJ’s common collateral operations have been successful in keeping rates under control,” said Hideyuki Ishiguro, a senior strategist at Nomura Asset Management. As rate concerns recede the equity market will shift its focus to China’s reopening and the outlook for the US economy, he said.

--With assistance from Winnie Hsu.