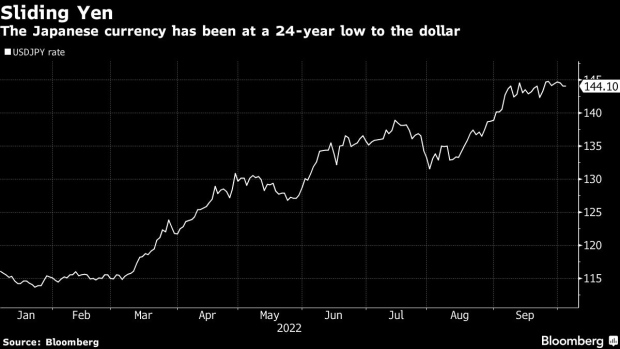 (Bloomberg) -- A tax cut on capital shifted back to Japan from overseas subsidiaries may help stem the yen’s rapid depreciation, some economists say.

Reducing the tax applied to repatriated funds would fuel an inflow of yen back into Japan on a scale that could rival the impact of currency intervention, economists from Dai-Ichi Life Research Institute and Mizuho Bank said.

That would be a positive development for authorities who have been forced to directly intervene in currency markets for the first time in 24 years to try to prop up the yen. While the US only had limited success with a 2017 tax cut that sought to encourage capital back, the economists remain optimistic.

“It’ll put a brake on the yen weakening,” said Hideo Kumano, executive economist at Dai-Ichi Life. It’ll encourage funds to flow into Japan “regardless of the yield differential with the US, so it could be quite a powerful force.”

Retained earnings of the overseas subsidiaries of Japanese firms totaled 37.6 trillion yen ($261 billion) in March 2021, according to the economy ministry.

“Rather than playing monetary policy tricks and being forced into a speculative war with the market, a more honest approach would be to return the foreign currency held by the Japanese economy to the domestic market,” he said.

Still, so far there’s been no clear sign from Prime Minister Fumio Kishida’s government that such a tax change is under consideration.