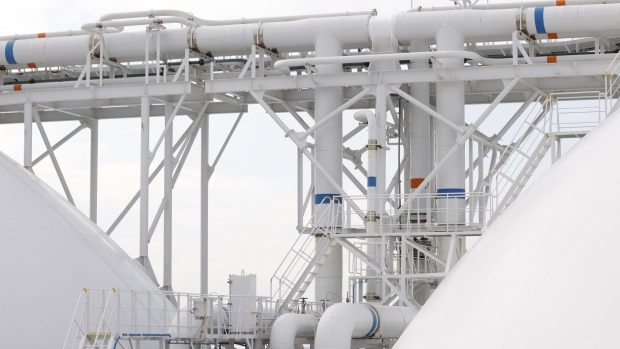 (Bloomberg) -- Japan will make sure its own energy demands are met before aiding Europe with shipments of liquefied natural gas in the event conflict erupts over Ukraine, according to the nation’s trade minister.

The comments come amid fears that European allies may run short of energy should Russia invade Ukraine, an attack Russian President Vladimir Putin has repeatedly denied he’s planning. The Biden administration and European governments have reached out to Japan, as well as other nations in Asia, about diverting gas shipments to Europe, Bloomberg reported on Thursday.

“Japan is an energy importer, and we are resource-scarce,” said Trade Minister Koichi Hagiuda at a press conference Friday in Tokyo. “There’s forecast for a very cold winter this year, so we do need to make sure our own energy demands are met. Japan will consider what it can do to contribute to the international community then.”

The geopolitical tensions surrounding Ukraine is another thorn in the side for Europe, which has been grappling with a fuel supply crunch for months. LNG spot prices have surged to a record high in recent months as utilities in Asia and Europe compete for the same supply of super-chilled fuel from exporters ranging from the U.S. to Nigeria.

Japan’s Hagiuda declined to comment directly on the diplomatic talks between Japan and the U.S. Hagiuda said that the best option was to avoid a situation where diverting fuel is necessary, and he hoped countries will put effort into a diplomatic resolution.

Unlike with oil, Japan does not have any national stockpile of natural gas, Chief Cabinet Secretary Hirokazu Matsuno said on Friday, adding that the government is aware that the nation’s electricity and gas companies have about two to three weeks worth of inventories.

Still, Japanese importers have already been selling spare supplies to Europe over the last several months due to more attractive prices in the Atlantic. Companies stocked up on LNG supplies ahead of the winter to avoid a potential shortage, and were able to offload some deliveries.

However, with inventories now running thin, Japan’s power generators and gas distributors will likely need to keep most of their contracted LNG over the next several months to prepare for the summer. That will limit the amount of fuel they can send to Europe.