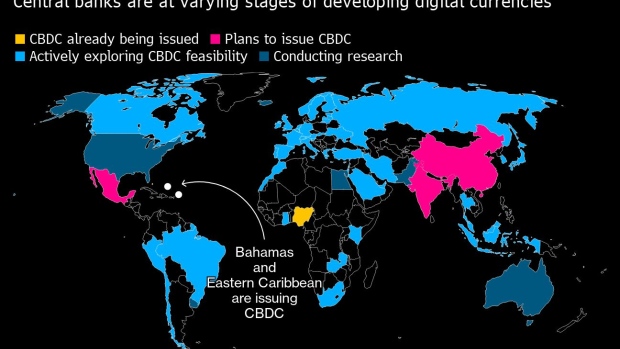 Pedestrians cross a road in front of the Bank of Japan (BOJ) headquarters in Tokyo, Japan, on Monday, Sept. 14, 2020. The Bank of Japan left its bond-purchase amount unchanged at a regular operation on Monday. , Bloomberg

The Bank of Japan will explore the design issues of a central bank digital currency in measured steps like Sweden rather than pressing ahead with large-scale pilot tests like China, according to the BOJ’s point-man on digital yen research.

“Sweden’s staged and planned expansion of experiments is a better fit for us than China’s big-scale tests from the get-go,” Kazushige Kamiyama, the head of the BOJ’s payment system department, said in an interview.

“The framework and design of the central bank digital currency needs to be decided as a part of an overall settlement system for the future,” he added.

Kamiyama also said studies would continue in close cooperation with other major central banks including the Federal Reserve and European Central Bank in remarks that suggest the BOJ is looking to proceed with its research cautiously while ensuring compatibility with other potential CBDCs.

Earlier this year China took a further step toward a full-scale launch of its digital currency by introducing it to a wider range of users at the Beijing Winter Olympics.

Sweden’s Riksbank, meanwhile, has focused on smaller-scale technical research including a test this year to see if an e-krona can fit into a settlement system with other digital payment providers.

Like the Riksbank, the BOJ has yet to decide if it will issue a CBDC. Japan’s central bank says the decision is up to the public.

Still, with the pandemic accelerating cashless payments and strong interest in alternative assets for payment such as Bitcoin, an increasing number of central banks are looking into the need for electronic money.

Some 87 countries representing over 90% of the global economy are exploring the possibilities of CBDCs, more than double the number in 2020, according to Atlantic Council, a Washington-based think tank.

BOJ Governor Haruhiko Kuroda said the decision on whether to issue a CBDC is likely to be made by 2026.

Japan’s central bank launched the second phase of its digital money experiments this month and Kamiyama signaled that proceeding to a pilot test, the next phase, is likely.

Kamiyama said the need for a ceiling on holdings and transactions will be throughly considered during experiments, echoing the position of European officials.

“Many private-sector businesses are calling for a limit to be set to avoid or at least contain any massive capital shift to a CBDC from bank notes or deposits,” Kamiyama said.