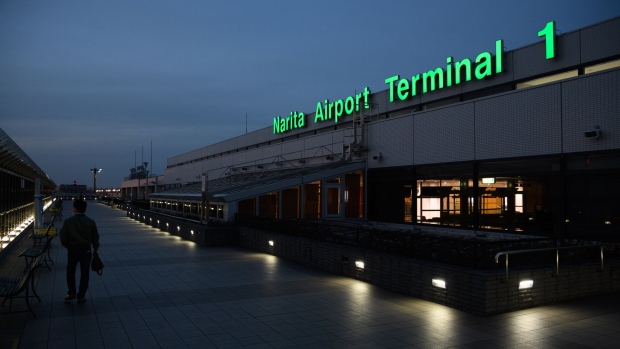 A man walks through a viewing deck of Narita Airport in Narita, Chiba Prefecture, Japan, on Friday, Feb. 12, 2021. The Japanese government is planning to keep the state of emergency in the 10 prefectures despite earlier reports that it was considering lifting it in some areas on Friday. Photographer: Akio Kon/Bloomberg , Bloomberg

The move, which may be announced in the afternoon, would effectively ban foreign visitors, except those allowed for humanitarian or other special reasons, the report said. Foreign tourists are already banned from visiting.

The report comes just three weeks after Japan began lifting its pandemic border restrictions, which were some of the strictest in the developed world. There are few cases now being reported in a country that’s close to 80% fully vaccinated and where the use of masks is almost universal.

Prime Minister Fumio Kishida said earlier in the day he was considering stepping up the country’s border measures. Kyodo News said Kishida would announce the new measures at 1:10 p.m.

The government has said there have been no omicron variant cases recorded in Japan.

Japan recorded 61 new virus cases on Nov. 28, compared with figures over 25,000 daily in mid-August. No new deaths were reported.