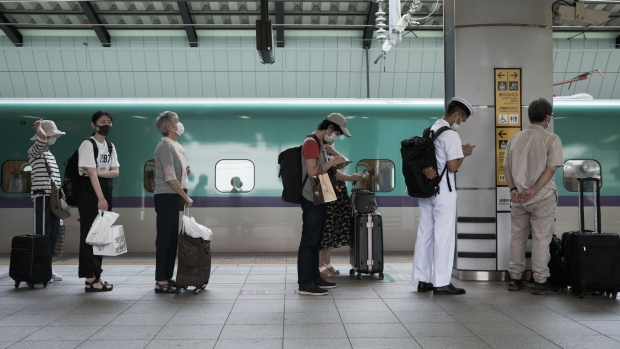 Passengers line up waiting to aboard an East Japan Railway Co. (JR East) Shinkansen the bullet train on a platform of Tokyo Station in Tokyo, Japan, on Aug. 7, 2020. Mid-August is a traditional time for many Japanese to leave the densely populated cities and travel to meet family in rural areas. But reservations of the bullet trains over this year’s Obon period are at just 16% of last year’s, according to JR East. , Bloomberg

Suga didn’t specify the places where the campaign will be suspended. New virus cases in Tokyo reached a daily record of 539 on Saturday.

Suga and his Cabinet gathered on Saturday to discuss the campaign, which had been a boost to the local economy with subsidies provided on travel and dining. The country’s virus task force had recommended that the government consider reviewing the program, Economy Minister Yasutoshi Nishimura said Friday.