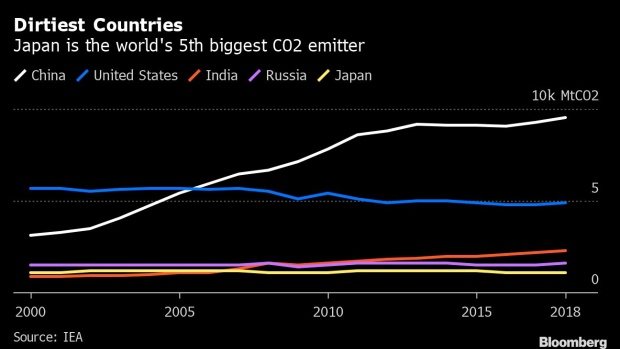 A vehicle drives past wind turbines operated by Wind Power Group KK in Kamisu, Ibaraki Prefecture, Japan, on Wednesday, April 29, 2020. Japan’s industrial production fell less than expected in March but much steeper declines are likely ahead as a nationwide state of emergency shutters factories and keeps shoppers home to contain the coronavirus. Photographer: Toru Hanai/Bloomberg , Bloomberg

(Bloomberg) -- Japan will promote the use of offshore wind generation and battery storage in its new effort to become carbon neutral by 2050, according to a government official, indicating how the nation might change its policies to meet the ambitious goal.

The world’s fifth-biggest greenhouse gas emitter, which is expected to formally announce the emissions pledge Monday, is aligning itself with commitments made by other major economies including the European Union and China, after lagging peers through its continued use of coal, the dirtiest fossil fuel.

“Japan’s leadership seems to have become more sensitive to the country’s reputational standing in the global climate diplomatic arena,” Jane Nakano, a fellow at the Center for Strategic and International Studies, said by email.

Major shifts in the country’s generation will be required to meet its new carbon targets as Japan remains deeply reliant on oil, coal and gas, with fossil fuels still accounting for 87% of its energy. Earlier this month, the country started reviewing its basic energy plan with a focus on how to change its long-term power mix targets.

Using ammonia and hydrogen as alternatives to coal and liquefied natural gas will also be a part of the push, according to the government official, who asked not to be identified because the plan isn’t public. A spokeswoman at the Ministry of Economy, Trade and Industry, the powerful ministry that oversees the country’s industry and energy sectors, wasn’t immediately able to comment.

The commitment comes on the coattails of other efforts by the Japanese government to curb its carbon footprint, such as plans to shut more than 100 inefficient coal power plants and tightening rules that support sending the country’s coal technology overseas. Japan has faced increased scrutiny for policies that support coal-fired generation as investors and governments step up efforts to combat climate change.

While meeting the new emissions target could prove an uphill battle for Japan the transition may be easier than China’s recent pledge to become carbon-neutral by 2060. Emissions in China are still rising as the economy grows, whereas Japan has reported a decline in recent years.

To be sure, Japan has set lofty targets in the past its been unable to meet. For example, it still aims to derive as much as 22% of its power from nuclear reactors in 2030 but that effort has stalled amid public opposition and court challenges in the wake of the 2011 Fukushima disaster.

The nation’s private sector has already started a green charge. Jera Co., Japan’s biggest power producer, said earlier this month that it aims to achieve net-zero emissions by 2050 through shutting all of its coal plants and increasing dependence on hydrogen, while Tokyo Gas Co., the nation’s top gas distributor, announced a similar goal last year.

Japan will also need to accelerate and intensify plans for renewables deployment, while natural gas will likely be a much smaller part of its energy balance by 2050, even with widespread carbon capture and sequestration, according to James Taverner, an IHS Markit analyst in London.

“Current policies do not point toward a net-zero future by 2050,” Taverner said. “The next basic energy plan, due in 2021, will likely need to show major revisions in long-term aims for the energy mix if Japan is to move closer towards this goal.”

(Updates with analyst comment in third paragraph and details throughout.)