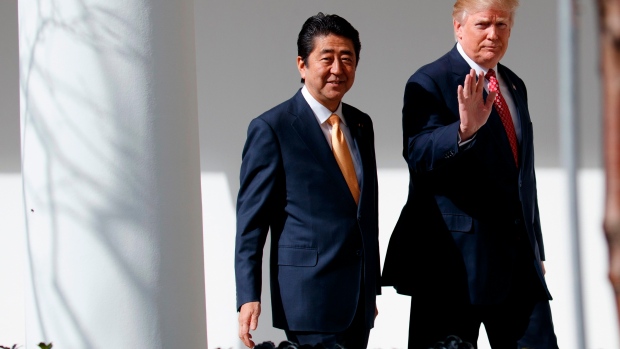 Japanese Prime Minister Shinzo Abe was set to arrive in Washington to meet U.S. President Donald Trump for the first time in six months on Friday, with a looming trade dispute set to overshadow the event.

Abe will seek to maintain his personal relationship with Trump, even as their two countries go head-to-head over a US$60 billion trade surplus the U.S. leader has frequently criticized as unfair. Abe is trying to avoid tariffs or quotas on lucrative auto exports and Trump wants to open Japan’s agricultural market a bit wider for U.S. farmers.

A day before the visit, U.S. and Japanese negotiators held a second round of trade talks in Washington, aiming to secure a speedy agreement focused on farm products and vehicles. There was one speed bump, after Finance Minister Taro Aso said Japan wouldn’t back U.S. efforts to link the yen with a deal.

Abe was one of the first world leaders to embrace Trump after the 2016 presidential election and Trump said this year that Abe had nominated him for the Nobel Peace Prize -- something he declined to confirm. His efforts to build one-on-one ties with Trump have shown their limits, with the Trump administration said to be preparing to seek more money from Japan for hosting U.S. troops.

The summit -- their 10th meeting since Trump took office -- will probably include discussions of North Korea and the talks will be followed by what has become a customary game of golf the following day. Japan supports maintaining sanctions against North Korea during nuclear talks and specifically wants to curb the regime’s intermediate-range missile program and repatriate Japanese citizens abducted by the country during the 1970s and 1980s.

Abe fortified Japan’s position ahead of bilateral trade talks that started last week by sealing trade pacts with the European Union and 10 other partners jilted by Trump when he abandoned the Trans-Pacific Partnership shortly after taking office. Rivals with lower tariffs are already beginning to eat into U.S. farmers’ 22 per cent share of Japan’s food import market.

The leader of the world’s third-largest economy only agreed to bilateral talks after Trump hit Japan’s steel and aluminum exports with punitive tariffs last year and later threatened to impose levies of as much as 25 per cent on all imported cars, including those made in Japan. Trump faces a decision in May on how to proceed with the auto tariffs.

Nonetheless, Abe has been careful to avoid any hint of public discord with Trump and will seek to maintain the friendly tone with an informal dinner to celebrate First Lady Melania Trump’s birthday Friday.

The ascension of a new emperor to the Chrysanthemum Throne next month -- the first such change in three decades -- has provided Japan with another opportunity to give special treatment to Trump. He is set to have a state visit in late May and be the first foreign leader to meet the new emperor. If Trump also visits Japan in June for the Group of 20 summit, it will mark an unprecedented three visits with Abe in as many months.

--With assistance from Emi Nobuhiro